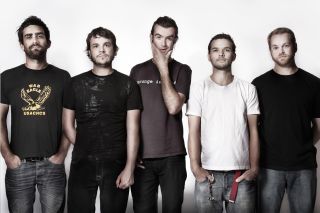 Aussie arena-rockers-in-waiting Karnivool are hard at work in the studio preparing the follow-up to 2009's Sound Awake.

Drummer Steve Judd popped out of the studio for long enough to talk new tracks, kit sounds and taking inspiration from some modern icons.

What is approach in the studio this time around?

"We tried to track drums for the majority of the songs in more of a 'live' situation, with the band in the room playing along to try and capture that energy. Not all of it was done this way, but we were aiming to do that as much as possible."

What are you going for in terms of kit sound?

"It varies between songs but generally aiming for big roomy sounds. Quite live sounding. Nothing too tight really."

"I try to keep things interesting but at the end of the day, the purpose is to play whatever best suits the songs and to both compliment and enhance the rest of the composition, not get in the way of them."

Which drummers were inspiring you as you headed into the studio?

"So many! Impossible to name everyone. I'm always listening to heaps of music and am constantly inspired by what I am hearing. You can draw influence and ideas from anything really. In terms of drummers, I love Questlove so anything from The Roots always gets my ears pricked up. I'm really into the new Deftones record, Koi No Yokan. Abe Cunningham kills on that. Anything that Chris 'Daddy' Dave does. He is a monster. The last Robert Glasper record is crazy good! I've also been getting into some cool electro stuff at the moment. Artists like Baths, Flying Lotus, Mount Kimbie, Seekae and other stuff of that ilk. Really interesting sounding records."

What kit/set-up are you using?

"A few kicks and an assortment of snares were used throughout the process but my set up for the majority of the record was Pearl Reference drum, ZIldjian cymbals and Remo heads."

Are there any tracks you're proudest of from a drumming perspective?

"I am proud of them all. I think Nick has done a great job pulling some killer sounds and getting the performances needed for all the songs. The Refusal was probably the most fun to track though. Nothing to do with the actual parts themselves, but just in terms of the energy of the song that came across while we were recording it."

"The release of the new record which we are all looking forward to. A DVD release. Lots of touring. I can't wait to get out on the road and start playing the new material for people. It's going to be a lot of fun!"