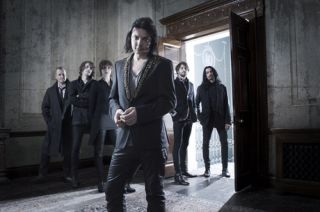 Songwriting drummers are far from anything new, but they seem to be cropping up all over the place of late, a fact shown in the regular rotation new albums from former Razorlight drummer Andy Burrows and ex-Placebo tub thumper Steve Hewitt have been getting on the Rhythm stereo.

We recently caught up with Steve who filled us in on how his new band - Love Amongst Ruin - came about, his move upfront and the heartache involved with handing over drum duties.

How did the band come about?

"After I was unexpectedly ejected from Placebo I got in touch with an old friend of mine John Thorne who was the bass player in Lamb. It all started as a project with no exact goals, but I spent the next year-and-a-half doing recording sessions, using the break-up as a platform of writing songs."

Is the album all new material or did you have a few older songs that you revived?

"It was all new material. All of the songs on the record were the first ones I came up with. There's no mass of material, the first ten songs we wrote we put on there. In that respect it's a very honest record."

How did you go about choosing a drummer?

"I played all drums on the album, then I went to Keith Yorke, a good friend of mine who I've known for 20 years. We play quite similarly really, so it made sense for him to come in. Nobody in the band has been auditioned, it's all about the vibe. It's turned out they're all great musicians."

Has it been difficult to hand over drumming duties?

"Of course. I miss it dearly. I spent 20 years playing the kit. I still play for demos and maybe for the next record. Me and Keith are cool about sharing drum duties for recording. I'm still going over that handover. I miss it live. It started as a project and now I'm like, 'S**t, I'm fronting a band, that wasn't meant to happen!'"

Is it strange to suddenly be up at the front of the stage?

"It's very life affirming to do something you never expected. It had never crossed my mind that I'd be singing in a band. It just happened."

Did you try anything different when recording drums for the album?

"I always play drums as a writer. This isn't a drum album, the drums are there to help the song along. Looking back on the album, I suppose some of the drum tracks could be more developed, but they do what they do, really, just let the track breathe.

"On the production side I had the freedom to get the songs how I wanted them. I didn't have to fight against two other guys, which was always a bit of the case in Placebo. We'd do a great mix and then Brian would say, 'Right, let's turn the vocal right up'. I think I got the best drum sound, better than any Placebo record."

What set-up did you use in the studio?

"I used my white Yamaha Maple Custom, which sounds fantastic. Cymbals were all Zildjian A Customs."

What's coming up for the band?

"We've got Sonisphere, which will be our fourth show, in at the deep end! Album is released on 12 September and then we go out on tour on 25 September."

For more on drummers making the move from behind the kit to upfront, check out our interview with Andy Burrows in the latest issue of Rhythm.