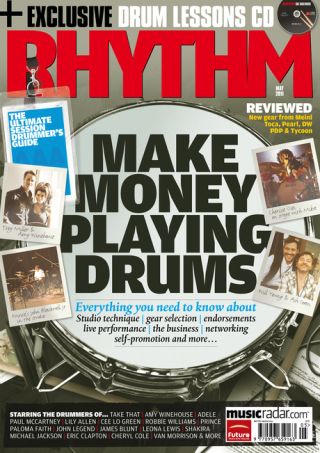 Nightmare gigs and sessions happen to all of us, even hugely successful drummers. Take a look at these, and make yourself feel a little better about your last gigging disaster.

Swiss Chris: "After College working at the classic Funky Slice Recording studio in downtown Brooklyn, 1997, doing drum-programming/ acoustic/ electronic drum recording/ writing/ arranging with Mr. Bluefor an MTV Show. We also recorded a whole EP for Mr. Blue's band 1 ADAM 12, we were about to blow up and sign a big record deal and be famous. We never did and additionally to not blowing up, the biggest New York Hip-Hop station stole one of our songs and used it for a radio commercial."

Cherisse Osei: "One of the first times I toured North America with Mika we had a show in Salt Lake City and our equipment got stuck in the snow so we had no set and no musical equipment. We managed to find a film props rental place nearby and rented an assortment of odd items including a huge inflatable hand, a throne, a bicycle, a stuffed dog which we covered with fairy lights! We luckily managed to hire some equipment from a rehearsal studio nearby and did an acoustic gig in front of this weird and wonderful set we had created and the gig went down a storm and was one of the best of the tour!"

For more session tips, tricks and stories pick up the latest issue of Rhythm and take a look at our online Session Month.