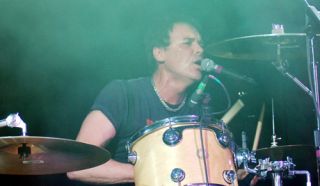 Former Ramones drummer Richie Reinhardt returns to the UK after a quarter of a century away later this week.

Looking ahead Richie said: "It's 25 years since I performed in London. That's a long time! I'm in Ireland recording an album with The Gobshites so I said, 'We should go over to London,' I'm so close'. So I hooked up with The Ramonas to put on the show. It's very exciting."

Of course, given the non-stop nature of The Ramones' back catalogue plenty of work has gone in ahead of the show.

Richie adds: "I've been in training for two weeks for this show in London because you have to keep up, it's brutal. It really is."

And it seems that things are really gearing up for the drummer.

"I start my tour with Tommy Mills and the Jade Amenity in Washington on 31 December and his album comes out in two weeks. I'm also working in my studio re-recording some of the songs I wrote for the Ramones as well as some new material. I'm putting my twist on them and they're sounding really good. My style is a little heavier as opposed to just that chainsaw. You're going to see a lot of Richie Ramone in 2012. I've been rather quiet over the years but I'm coming back at full force now."