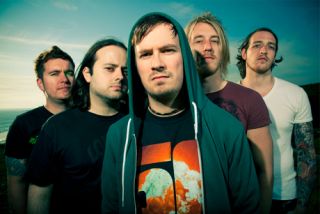 Back in 2002 Welsh emo superstars in-waiting Funeral for A Friend had the world at their feet. With heavy media rotation of their blistering single 'This Year's Most Open Heartbreak' and two sold-out EPS in the bag, the pressure was on to come up with a blinding debut album.

Ryan Richards and co delivered in spades with Casually Dressed and Deep In Conversation. From the explosive opening of 'Rookie Of The Year' through to the delicate ghost-note filled conclusion of closer 'Novella', the album was a triumph.

Now, as the band prepare to play the record in its entirety at two special shows later this week, we caught up with Ryan Richards to get his memories on recording the album that shot Funeral For A Friend into rock's mainstream.

What was the mood in the band like ahead of recording Casually Dressed and Deep In Conversation?

"It was a whirlwind time for us. We'd just signed our record deal and there was a lot of touring. The anticipation of an album was quite high so we were trying to fit it in between touring. The first half we did at Chapel Studios in Lincolnshire, which is still one of my favourite studios. It's so remote that there's literally nothing to do but think about recording. We did the first half there, went on tour and then did the other half in Rak Studios in London. Again it's one of my favourites, but I guess it's the opposite side of the spectrum being in the middle of London. But all of that made with an interesting record and I got to work in two great drum rooms."

You said it was a whirlwind, did you feel the pressure of the hype surrounding you?

"I think if we'd thought about it for too long we would have. But we were right in the middle of the whirlwind so we were just getting things done."

Were all of the tracks ready prior to entering the studio?

"Two tracks we'd already recorded with Colin Richardson (producer) and then there were two tracks we re-recorded which were 'Juneau' and 'Red Is The New Black'. There were some we'd been playing live for a little while but most were ones we'd never played at a gig before so a lot of the arrangements were done in the studio. Colin came along to rehearsals and helped and he had great ideas and he really got the best out of us."

Did you have a sound in mind before you went into the studio?

"We told Colin that he'd hit the nail on the head with the sound on our second EP and we said we wanted that for 12 tracks and that's what he did."

What kit were you using on the album?

"Colin had a kit that they rented in that was a bit of a hybrid that he really liked the sound of. It was a 22" GMS kick which sounded really good. Apparently at the time it was the only one in the country, so he said anyway. We used DW toms and Colin's favourite snare which was a Black Beauty and we got a great sound from that."

How much work went into getting your sound for the album?

"That was the longest part of recording, getting the sound. Colin's greatest strength is getting tones, he's so meticulous. When we were doing the drums Colin must have taken apart the snare two or three times. He took every screw out, decided he didn't like the sound then took it apart it again. This went on for a three day period, I think."

Was there much dampening on the kit?

"The kit wasn't overly dampened, we had a decent sized room and got a pretty big sound from the kit, That's why Colin takes so long, he wants to rely on the sounds captured in the studio as much as possible and not rely on samples and that kind of thing."

Did you have much experience of playing to a click prior to heading into the studio?

"I was getting used to it at that point. It wasn't a big problem but with Colin being so meticulous you really needed to be on the click. If you were a millisecond out he'd pick up on it and have you in there doing it again. It was pretty gruelling."

Were there any tracks that proved particularly troublesome?

"We did one called 'Ten Scene Points To The Winner' that took a little while. There was some pretty quick double kick. Colin wanted to get them exactly on the click so he put me through the ringer. Some producers would have you do it and then just drag it into ProTools, but he really wanted me to do it spot on. It took a little while and then we didn't even use it. All that effort for a b-side!"

Did going through such a gruelling process early on in your career stand you in good stead for future albums?

"Definitely. It improved me a lot as a drummer. Before going in with Colin there was a tendency to be a little sloppy with parts and tempos. You could get away with it in the vibe of a gig but it really got me to think more about tempos and get the groove in the pocket. Consistency as well, making sure every stroke is as strong as the last and making sure you don't get excited and rush fills. It put my plying under a microscope and taught me what I needed to brush up on."

What were your first impressions of the finished album?

"We were stoked. I was stoked with the drum sound as well. It took a lot of time to get it, but it paid off so I really didn't mind in the end. Then when we released it and got such great feedback it made it all worthwhile."

Was there a track that stood out as your favourite?

"'Novella' was really cool because that was the one where we used a couple of different kits and it's pretty full on for the first couple of minutes then cuts off to a mellow build up. We used a couple of different things for that. For the first part we used brushes with a little snare roll on the brushes and then for second part I had a stick in my right hand and a brush in my left so that was how he built it up with the stick beating on the hi-hat and the brush on the snare."

What impact did the album have on you guys?

"It changed our lives. It set us up to still be able to doing it eight years on."