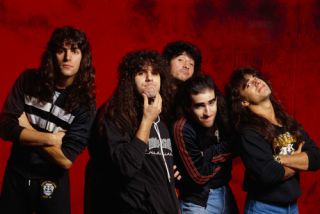 With thrash still enjoying a renaissance thanks to the near-legendary big four shows earlier this year, we've got the lowdown from one of the genre's big players on one of its seminal albums as Charlie Benante revisits Among The Living.

Was the material ready to go when you went into the studio to record Among The Living?

"Most of the material was pretty much written and rehearsed. We were really prepared going into it. The produce we wanted was Eddie Kramer, who was known for doing Hendrix, Zeppelin and Kiss and I always loved the vibe that he brought. We went into making the record with the feeling that we didn't want any big reverb, we wanted it was tight, punchy and hardcore sounding as possible. That was the mindset."

How did you go about getting your sound in the studio?

"Eddie had some techniques when it came to miking the drums. He used 58s on the top and bottom of the toms and the snare sound we got for the record was another very important thing. It had a crack to it, but it had this nice warmth to it as well. That was an old Ludwig drum that I used."

What kind of feel were you going for?

"We wanted a very live vibe. No click tracks. If I push the song, lets just go with it, if I pull it, go with that. We weren't worried about the technical aspects."

Was getting the right miking a long process?

"That was Eddie's problem, just keep them out of my way! Eddie wanted me to take the front heads of my kick drums off and stuff them with pillows. It was really difficult for me to do that because I still needed the feel of that head. When I took it off it ruined the feel so a lot of the fast double kick stuff wasn't coming out. So I had to go back and put them back on."

How easily did getting your sound fall into place?

"We moved the drums around maybe two or three times in the studio to find the spot that sounded great and felt good. And then we just went with it. As a bonus we went to the Bahamas to mix it. While we were down there U2 were dong Joshua Tree. The night I didn't go down to this little pub down the street, Edge and Bono were there."

Were there any tracks that were particularly difficult to lay down?

"There was one called 'The Horror Of It All'. The end of the track has this very fast double kick pattern, probably the fastest ever on any of our records. If I listen to it now I think, 'What was I thinking?', it's super, super fast. I remember going for that quite a few times before I got it without any flams. That was one I had to work for."

Were you aware of the strength of the material at the time?

"No. It was just our next record. You don't put much emphasis on how great you think it is, because that's just your feeling. You don't know how it's going to be received. There's some songs like 'Smells Like Teen Spirit', that you'd be like, 'We've got this song in the can, wait until people hear it'. But, none of these songs were radio friendly songs. They're live driven, that's the kind of band we were. We couldn't count on MTV to help us out, it was all word of mouth. We always said a record sold is a ticket sold. Whoever bought the record was definitely going to come see us."

Do you remember first hearing the finished album back?

"We were super stoked about out. I always love putting the track order together. I always treat ever record as if it was a baseball line-up of hitters. You start out with a strong hitter, then follow up with a guy who's probably going to get to second base, then the fourth one you want to be the big one."

Do you play the material the same today as you did when it was first recorded?

"Some I play differently. After all these years you tend to forget how you play them on the record. I revisited the record because we did a deluxe edition. It was interesting. Some songs my drumming was so busy, I was playing and playing. I'd probably approach it differently nowadays. That was being young, not knowing and just going for it. Wisdom comes with age."

For more from Charlie and Anthrax, order yourself Rhythm 179 from www.myfavouritemagazines.co.uk.