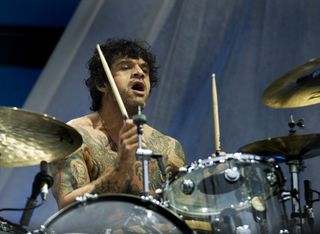 Homme, drummer Joey Castillo and co are out on the road in support of the re-release of their self-titled debut album and fittingly play the entire record from start to finish.

'Avon', 'Regular John' and 'You Would Know' are still stone(r)-cold classics more than a decade on from release, with Castillo injecting plenty of absolute raw power into Homme's hypnotic riffs. In fact Castillo is pretty much flat-out from start to finish, pounding relentlessly at the kit for a breathless 120 minutes.

With the debut album dispatched Queens run through a few choice cuts from their sizable back catalogue. After blitzing through 'Burn The Witch' they even start taking requests, with 'Make It Wit Chu' and 'Monsters In The Parasol' slipping into the set.

By the time Joey busts out the jam block for 'Little Sister' the Roundhouse has just about lost its mind, before show closer 'Go With The Flow' finally tips them over the edge as what must be the year's greatest birthday bash comes to an end.