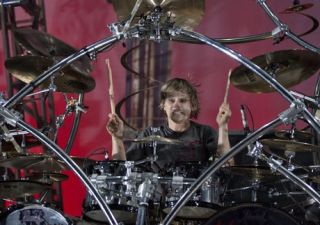 Korn have enjoyed an almighty resurgence in the last year or so, from the nu metal scrapheap to revered rock survivors. The return to form coincided with Ray Luzier joining up with the band and he has his own idea about what he's brought to the party.

Luzier told HamptonRoads.com: "I had a lot of respect for the original drummer. But what I felt was lacking in the band was the power and heaviness.

"I'm not one of those guys who sit there and play with a waiting-for-the-bus look on my face. I'm definitely an animated player. I want to give the people a show. There are not a lot of love ballads in our band. That's what I wanted to bring back: the power of the groove."

After catching Luzier and Korn at last year's Ozzfest, we'd be inclined to agree. There's not many love ballads in your typical Korn set, Ray doesn't play with a waiting-for-the-bus look and he sure has brought a hell of a lot of power back to the band.