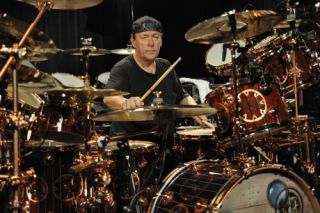 Neil Peart has revealed that Rush have been hard at work and have finished writing for new album Clockwork Angels.

Posting on his website Peart admitted that even at this stage in thia career, the record has been a different process to his past work with the Canadian rock icons.

Peart explained: "In recent years I have been working deliberately to become more improvisational on the drums, and these sessions were an opportunity to attempt that approach in the studio. I played through each song just a few times on my own, checking out patterns and fills that might work, then called in Booujzhe (producer Nick Raskulinecz). He stood in the room with me, facing my drums, with a music stand and a single drumstick — he was my conductor, and I was his orchestra. (I later replaced that stick with a real baton.)"