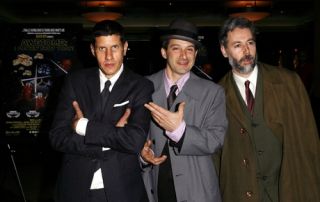 In what must be the most unlikely career switch ever, Mike D has become a wine critic.

Yes, the Beastie Boys stalwart/rapper/drummer has taken up the role as a blogger for wine merchants James Suckling. Just take a look at an excerpt from his first post below.

"I had a half bottle of 2006 Jean-Marc Morey Santenay La Comme Dessus last week at Momofuku Ssam Bar here in New York during a late and delicious lunch break from the studio. We are putting the finishing touches on a new album. Fortunately, we have been working closely with our esteemed colleague Mr Zdar, so we have been sticking to his French work ethic of strong coffee and lengthy sit-down lunches".

Blimey. Here's where we should probably indulge in some Beastie Boys/wine puns, but we're a little too shocked that Mike D's studio breaks consist of sipping 2006 Jean-Marc Morey Santenay La Comme Dessus during a "delicious lunch break" to function properly.