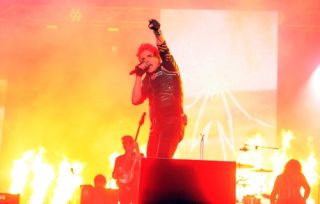 My Chemical Romance have been without a full-time drummer since the less than amicable departure of Mike Pedicone last year.

Jarrod Alexander has been filling in for the US rock megastars since then, and in a recent interview guitarist Frank Iero was quizzed about whether the former Death By Stereo man would get the gig permanently.

Iero told The Aquarian: "Jarrod is a rad guy and a fantastic player. It's been really fun making music with him these past few months. He loves coffee and hitting drums super-hard… and the fact that he's not a thieving piece of garbage is a breath of fresh air."

The guitarist seemingly couldn't resist poking a little fun at the ongoing speculation regarding MCR's drum stool, adding: "But since we only had a week's notice to prepare for this show and with scheduling conflicts and all we decided that instead of using a real-live human drummer we are going to use the super computer fromWar Gamesinstead. However, we have nicknamed the computer Jarrod."