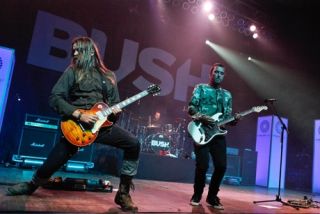 Bush are back! The UK grunge poster boys have dropped a new album, their first studio effort in a decade, and we sat down with Robin Goodridge to get the lowdown on how one of Britain's biggest rock exports came back from the dead.

How did the reunion come about?

"Gavin came to me and said he wanted to write a record. We went ahead and sat back and listened to the songs. He started playing me songs and we wrote about 40 songs and worked out which would be most appropriately Bush. He already had Chris Traynor who did the last tour with Bush and they found an LA-based bass player and that made the band a four-piece and we had a working unit."

Did it all come together quickly once the band was in place?

"It's taken a couple of years because we were signed to Interscope when we first started the project but we've since become our own record label. We believe that's the future for acts that have sold some records because the contracts now aren't worth bothering with. All that delayed us by almost a year. We had the album ready to go and had to go through all that divorce stuff. But all is good now. It's good to be free and make any decisions we like. We can do whatever we want."

The new album, Sea of Memories, has had a great reception

"That's amazing. It's the one thing you can never guarantee. We tried to stay true to what was us. Obviously we had two different band members so there was certain things that moved around a little bit but I think the guts of the band is definitely there."

How did the recording of the album go?

"I was fortunate enough to work with Bob Rock. We did the drums in Sound City Studios which has probably the best drum room in LA if not America and I actually did the last drums in that building because it's no longer a studio. It's an amazing live room that's now gone. For me it was easy. I just set up my drum kit and let Bob do what he does because he's a genius and he's been doing it forever. He do whatever you want sound-wise."

Was Bob hands-in when it came to drum tones?

"He lets you tune how you want to tune. I tune really wide open with no dampening. I used by favourite snare drum on about four tracks and every now and then Bob would switch out the snare and try different things. We used my DW toms all the time but just swapped a few things around. Bob is amazing, he gets a drum sound in two hours which is great because you don't get bored. I've worked with other producers where it's two days before you get a drum sound. It's boring. Bob's amazing, he said the secret's in his microphones. He's got all the old mics so if you want to sound like John Bonham he'll just pull out the mics that they used to mic John Bonham up."

What kind of drum sound were you shooting for?

"The album sounds modern. Technology has changed so much even in the last ten years. I'm really happy we captured a lot of the fat drum sounds we love and it's all a little more high quality now and it's a little more polished. I really like the drum sound on 'The Sound of Winter'. That was one we worked on a lot. I was very happy with that and it came together really easily. I said I wanted a 'Back in Black' drum sound and see where we go. There's nothing wrong with starting with one of the best drum sounds in the world and see where you end up. It seemed to fit really well, the fatness of the snare. That one came out exactly how I expected. 'All My Life' as well I wanted a more Bonham kit sound and within ten minutes we had it, just switched out the kick drum and used 15" John Bonham hi-hats and it worked really well. Once we got going it came together quickly, I was tracking three tracks a day. Bob likes to do a couple of parts and he edits between them. I leave that up to him, he's so good at it it's not worth sitting there. If there's something I don't like I'd tell him but he's got great ears, that's one of his talents."

What's next for Bush?

"The idea is to establish this band back as one of the more successful popular rock bands which we had ten years ago. It's going very well so far and there's a lot of work ahead but we're fine with that."