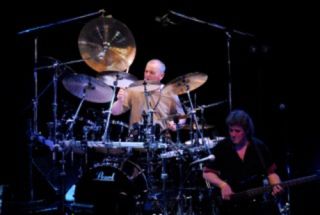 Pick up the brand new issue of Rhythm and you'll find Jon Hiseman talking all about his illustrious career behind the kit. Jon has chronicled his extensive experiences with the likes of Colosseum, Tempest and many more in his memoir Playing The Band.

Take a look at excerpt threee of five from the book below, as Jon and Colosseum head into Europe.

On 25th April, 1969, Colosseum played the first of four nights at the prestigious Montreux "Golden Rose" TV Festival. The fee per show was a derisory £75, plus expenses, but was justified by the promotional value of appearing before an 'invitation-only' audience comprising TV producers, press and other industry and media heavyweights. The deal also included performing three songs for Swiss TV, which would subsequently be offered to Eurovision, for screening in other countries. It was all setup by Colin Richardson, who saw it as a means of breaking into the European markets. It seems to have worked, as only a week after the "Golden Rose" they found themselves in Hilversum, Holland, for another TV show.

With Valentyne Suite in the can, the band returned to Montreux in June, this time to appear at the renowned Jazz Festival, on a bill that included Ella Fitzgerald, Clarke Terry's Big Band, John Surman and, rather more unusually, Ten Years After. How Colosseum played at the festival is lost in the mists of time, but what is remembered is the 'impromptu' performance by the casino pool as a publicity stunt, delighting the many punters that witnessed it. As it was a warm, sunny afternoon, Dick decided to play 'topless', so to speak, and at the end of their final number, immediately jumped into the pool to cool off. Almost the stuff of which legends are made!