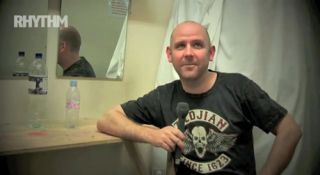 Elliott Henshaw is again paying tribute to his big band heroes with a show at Ronnie Scott's next month.

Henshaw, who was the driving force behind the Buddy Rich Memorial concert earlier this year, will perform at the iconic London venue on 29 July. The show will see Henshaw's own big band tip their hats to the likes of Buddy Rich and Gene Krupa.

"The show came about because I was approached by James Pearson - the house pianist at Ronnie Scott's," Henshaw explains. I have worked at the club before with their own big band and also with my own 5 piece band.

"James asked if I wanted to put a big band together and pay tribute to the great jazz drummers of yesteryear. I had just done the Buddy Rich 25th Anniversary Memorial Concert at the Palladium so I obviously jumped at the chance."

The show has had the sticksman listening back to the past masters, but he's keen for the event to have its own identity.

"Since I got the call I have been listening to a lot of the original recordings that feature these guys and working out a set list. I want to stress that I don't want the gig to be a 'Stars In Their Eyes' type of evening. I'm not interested in trying to sound like these guys - I'm not good enough to even if I wanted to - it's more about myself and the band paying homage to these guys with our own style and influences and hopefully bringing a 21st century feel tothe music.

"I am really excited and nervous about the gig. I want to do the music justice and make it a fitting tribute to all of these drummers whowere such a big influence on me. The show will be quite high energy but not just full of drum solos - I want to highlight the importance of swing and groove that these guys had as well as their virtuosic ability on the drums. So now it's on with the practice, not just on the drums but trying to figure out what to say on the mic - I get more nervous about that part!"