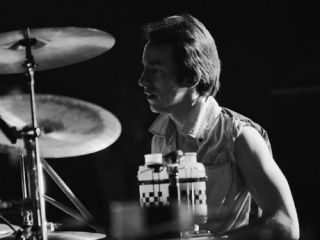 Nick 'Topper' Headon may have been an unlikely choice for The Clash with his background in soul and jazz, but while other great punk drummers such as The Sex Pistols' Paul Cook was reined in by the straight-ahead power of the Pistols' three-chord punk, Topper's versatility would help The Clash to assimilate many styles, from funk and reggae to jazz and rockabilly. His reggae chops on 'Guns Of Brixton' and 'Rudie Can't Fail' are masterful; his nifty hi-hat work worked when the band did disco ('Rock The Casbah') as well as hard-hitting rock epics such as 'London Calling'. And of course, on the likes of 'White Riot' he has the furious punk beats too. His drumming undoubtedly pushed the band to impressive heights, while his hi-hat work and driving snare-kick patterns are simply masterful.

Topper, who had started with The Clash a keep-fit fanatic with little time for cigarettes and alcohol, was eventually kicked out of the band for his heroin addiction - as he put it to Rhythm in 1986, "for being untogether". In that year - Rhythm's first year of publication - he released a solo album, Waking Up, and a cover version of Gene Krupa's 'Drumming Man'. Of his solo work, and the challenges of working with musicians such as soul singer Jimmy Helms on his album, he told Rhythm: "The Thing about The Clash was nobody could really play, so it had to be spontaneous! With musicians of the calibre I had on my album, you don't have to over-rehearse them - they just go in there and do it in one or two takes. So it still sounds fresh, but in a different way."

On the subject of the increasing use of drum machines in the mid-'80s, Topper told Rhythm: "I hate electronics, because it's not what music is about. People like to dance because the rhythm is connected to the beat of their heart. Drumming is like a heartbeat. When you get excited, your heartbeat speeds up, so why shouldn't a drummer? It's all part of dynamics to be able to speed up, especially when you're playing live. On the other hand, if you tie yourself down to a machine, you can't be that loose."

For 100 moreDrum Heroes, get yourself a copy ofRhythm Presents 100 Drum Heroes, available in the shops,onlineand onNewsstand foriPad, iPhone and iPod Touchright now! It's got loads of interviews and profiles with a ton of drummers, plus it's beautifully illustrated with classic and new photographs!