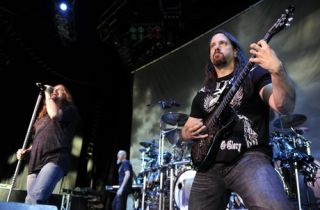 Dream Theater frontman James LaBrie has described the band's auditions for a new drummer as "phenomenal" and "surreal".

LaBrie also told CKRL 89.1FM that the proggers are in no rush to name a replacement to Mike Portnoy.

He said: "Right now we're going to take our time and really be sure of the decision that we make, which is one of the most important decisions ever made within the band. So right now it's all about preparing for the future and making sure that the next chapter will be an exciting and really amazing ride.

"[The auditions] were phenomenal. I mean, it was something, obviously, unprecedented for this band, and it is for most bands, but it was just a really unique and very surreal experience for us."

Who would you like to see take on the challenge of replacing Portnoy?