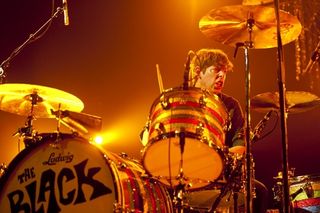 Nickelback and their brand of world dominating rock cop a fair whack of flak, right? It seems as many people hate them as love them. It's safe to say after his latest comments we know which camp Black Keys drummer Patrick Carney belongs in.

Talking to Rolling Stone he pretty much blamed the Canadian monsters of rock for the downfall of rock 'n' roll. In fact, that's exactly what he did.

It's ok though, Patrick can take it as well as he gives it, he also dished out some sobering words regarding his own talents.

"I suck at the drums, so it's terrifying... Just trying to keep it together," he said while discussing stage fright. "I see a lot of comments on Twitter and stuff about how ugly I am, how bad I am at the drums, how awkward I look, and I'm like, yeah, I agree with most of those things."