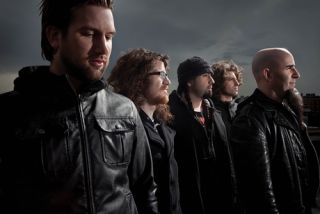 Yesterday, we showed you what Andy Hurley had to say about recording The Damned Things' debut album Ironiclast. Turns out he had plenty to say about his kit and laying down the beats for the record. Check out part two of our interview right here.

What kit did you use in the studio?

"I used the drum tech's kit. It was a Tama Starclassic. I can't remember everything but I know it was a 13" rack and 16" floor. And then I usually used a bell brass or Black Beauty snare."

How does that differ from what you'd use in the studio with Fall Out Boy?

"On the last Fall Out Boy record I used one of my C&C touring kits. It was for the Infinity On High tour. It just had a really good studio sound. It's hard with drum kits, especially if you use them on tour, they don't always sound great in the studio. They don't always resonate well because they can get warped while you're on tour. But it's not too different. All the sizes I used on the record are the same as I'd use with Fall Out Boy."

Why did you decide to use the tech's kit on the album?

"I do that a lot. I do it with Fall Out Boy too. I just think that the drum tech on a record is tuning everything and he has equipment that he's really comfortable with. And he can tune it at the drop of a hat. For Fall Out Boy we'd always have a bunch of kits and just pick which sounds the best. It's always the most important thing when you're recording - what sounds best sonically. This was the same thing, his kit just sounded awesome."

How do you go about getting your sound when you're using an unfamiliar kit in the studio?

"I get to figure out what it's going to sound like because you always to an hour of line checking in the studio. You're always going through getting the right sounds. So I get to sit and jam with it for a little bit and make sure that it sounds like I want it to. The only thing that ever really changes is the snares. That's a song by song thing. With this band Joe, Rob and I worked on that. Because I went into this band not knowing what the vocals were going to sound like, they had a better idea of how the snare was going to ride on the tracks. But I like the snares that I like so I always push for those."

Do you typically know the drum sound you want before you even head into the studio?

"Yeah. Like I've always loved metal snares. They're just so heavy to me. I've been using a Black Beauty while on tour with Fall Out Boy and now I'm renting a kit because now we're a new band and we're kind of breaking even so you take what they give you. I'm super stoked with the set that I have though."