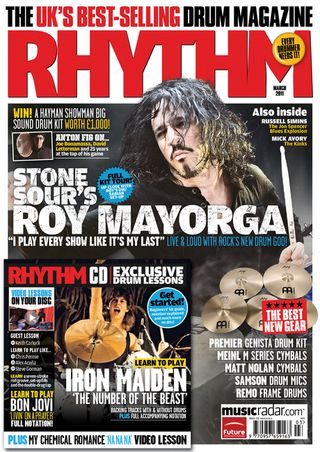 The brand new issue of Rhythm is out now and it's packed full of features, lessons, reviews and a ton more. In fact, there's so much that to help get you started we've put together a list of five things you can learn from the issue.

We get under the skin of Roy Mayorga, the monstrous tub-thumper for new rock royalty Stone Sour. Roy shows us there's much more to him than the hard-hitting sticksman, telling us all about his love of production, engineering and even film scoring. We also have a nose around his kit and talk to his tech and Stone Sour producer Nick Raskulinecz.

Anton Fig's thoughts on 25 years at the top

The drum legend talks Joe Bonamassa, David Letterman and as quarter of a Century at the top of the tree.

The former Guns N' Roses man on how the most dangerous band on the planet put 'Paradise City' to tape. Adler talks influences, kit and how he had no idea what the hell Axl was on about.

Our verdict on new gear from Premier, Meinl, Remo and Matt Nolan

As ever we've got all of the hottest new drum gear reviewed and rated. This month there's two new Premier kits, cymbals from Meinl and Matt Nolan, Remo's frame drums and more.

How to play tracks by Bon Jovi, Iron Maiden, My Chemical Romance

This month's Rhythm disc is again packed full of lessons and playalongs, including tracks by My Chemical Romance, Iron Maiden and Bon Jovi!

You can find all this and more in the brand new issue of Rhythm, which you can find in all good newsagents and www.myfavouritemagazines.co.uk.