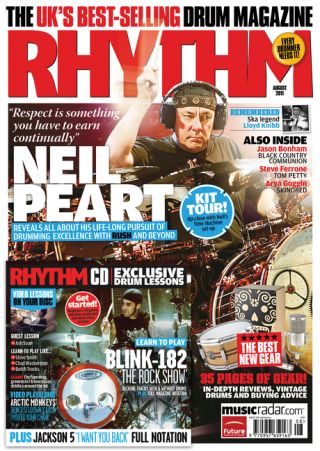 The August issue of Rhythm is out now and it's packed full of features, lessons, reviews and a ton more. In fact, there's so much that to help get you started we've put together a list of five things you can learn from the issue.

1. Why Neil Peart is still striving for drumming perfection

The Professor lets us in on his continuing strive for drumming excellence. The Rush legend talks taking lessons, improvisation and much more in our huge cover feature. We also take a nose around Neil's kit with a guided tour from his trusty tech Lorne Wheaton.

2. How to nail pop grooves, a Motown classic, a current chart hit and a pop punk anthem

Ash Soan gives the first in a new series of lessons on this month's Rhythm CD. The Adele/Robbie Williams drummer shows you how to get to grip with pop grooves. He's joined on the disc by our latest reading rhythm lesson, Jason Bowld's Double Kick Drills and playalongs for 'I Want You Back' by the Jackson 5, Blink-182's 'The Rock Show' and 'Don't Sit Down…' by Arctic Monkeys.

3. Our verdict on the latest gear, CDs and DVDs

This month we run the rule over new gear from Yamaha, Gretsch, PRK, Pearl, Sontronics and Roland. Plus there's reviews of new CDs and DVDs from Foo Fighters, Biffy Clyro, Peter Erskine and more.

4. How Black Country Communion brought Jason Bonham out of the doldrums and back behind the kit

Jason Bonham tells us about hitting lows as his Led Zeppelin stint came to an end and surging to new highs with Black Country Communion. He also gives an insight to family life with Bonzo and his Led Zeppelin Experience.

Skindred's versatile sticksman Arya Goggin on mixing styles, being festival favourites and really going for it in on their superb new album.

For more pick up Rhythm 192. You'll find it in all good newsagents or you can order a copy from www.myfavouritemagazines.co.uk.