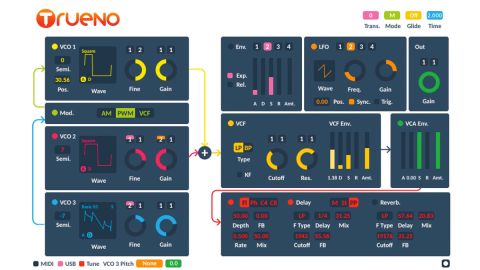 Trueno sounds good, but the trade-off in workflow isn’t worth it for most, we suspect.

Despite the fact that, sonically, the best of today’s virtual analogue softsynths are effectively indistinguishable from the real thing, the beneficial organic instability and immediately physicality of physical instruments continues to hold huge appeal to many electronic musicians.

Attempting to bridge the gap between plugin convenience and hardware authenticity, Trueno, the innovative analogue-synth-on-a-USB-stick from WS Audio, is a remarkable product, but also something of a white elephant. Let’s start at the beginning...

On paper, Trueno does look like a pretty great idea. A three-oscillator monophonic/paraphonic analogue synth stuffed into an eyebrow-raisingly small USB-connected aluminium ‘block’ (65x31x7mm), complete with filter, modulation and effects, and controlled via a software front-end loading as a standalone application or VST/AU plugin.

Everything is digitally controlled, and the LFOs, envelopes and effects are entirely digital, but the filter and oscillators themselves are genuinely analogue (although the former also have a digital additive mode - see It all adds up), which is, of course, the main thing. It is, quite literally, the world’s smallest analogue synth. And that’s impressive.

Getting going is easy enough. Install the software, plug in the USB stick, and launch the app or plugin. The interface is uninspiring, and suffers from being undersized on a high-res display, but it’s usable and relatively intuitive. The oscillators are stacked on the left, the filter, envelopes, LFOs and effects are on the right, with global transposition and legato controls at the top, along with a Mode switch for flipping between Mono and Paraphonic behaviour, the latter separating the oscillators for playing up to three notes simultaneously. At the bottom of the GUI, the orange field allows for assignment of a MIDI CC to the last ‘touched’ control.

The oscillators offer a choice of three analogue waveforms - saw, square and triangle - and up to 24 semitones of stepped transposition up or down, with the Fine control smoothly detuning by up to a semitone. Oscillator 1 features a pulse width control for altering the square wave (this stays awkwardly in view but devoid of function when any other wave is active), and oscillator 3 is available as a modulation source as well as an audible signal generator.

Targets for VCO 3 in Mod mode are VCO 1’s PWM control or amp, or filter cutoff, and being able to apply audio-rate modulation to any one of these three parameters is a real boon for sound design.

Trueno’s resonant filter is based on a “soviet Russian design” (the Polivoks, we assume), and offers low-pass and band-pass modes. It howls and squelches nicely with a signal going through it, but is surprisingly tame when self-oscillating, emitting a gentle whistle, rather than the ear-piercing shriek we were expecting.

Alongside VCO 3, Trueno’s other modulation sources consist of dedicated ADSR amp and filter envelopes, four assignable ADSR envelopes and four LFOs - a very healthy showing. Modulation targets include all three oscillator Fine and Gain controls, filter Cutoff and Resonance, and output Gain, each of which can have two sources each, with assignments made via drag and drop.

We’re disappointed not to see PWM, the effects parameters or LFO Freq and Gain on the target list. The LFOs output sine, square, saw, triangle or noise waveforms, and the envelopes can be linear or exponential.

It all adds up

As well as their bona fide analogue waveforms, Trueno’s oscillators can also each be set individually to Digital mode, turning them into additive generators drawing on up to 64 sine wave partials. Not only that, but these partials are fully user editable, making it possible to design your own raw tones from the ground up, for discrete usage and bolstering of the analogue waves, not to mention as modulation source signals in VCO 3.

To access Digital mode, just step the waveforms past the three analogue forms, or click the D button. Clicking the S button that appears in Digital mode changes the waveform view to the Spectral Editor, where dragging upwards in the graph display increases the amplitude of the partial under the mouse pointer, and dragging left and right sets multiple partials together, in standard additive synthesis style. Being absolutely tiny, as it is, the Spectral Editor is extremely fiddly to work with in its default state, but the zoom in/out buttons alleviate this somewhat, as you’d hope.

Having said that, with 256 preset waveforms onboard, including resampled basses, bells, guitars, keyboards of various kinds, flutes and more, you may never need to get your hands dirty with it anyway.

Trueno’s digital effects comprise Delay, Reverb and the Multi FX module, which switches between flanging, phasing, and four/eight-voice chorus. The Multi FX and Delay are pretty good, but the Reverb’s nothing to write home about. With audio generated by the synth’s onboard 24-bit/44.1kHz ADC, capturing Trueno’s output in your DAW is done by recording or resampling - bouncing in place won’t work. This isn’t as quick as offline rendering, obviously, but it’s a mild inconvenience rather than a ‘problem’. In all other regards, Trueno works like any other plugin synth, with no additional latency over what your system gives you, and audio output appearing on its mixer channel.

There are a few notable issues, though, the first being a lack of onboard preset management - patches can only be stored using your DAW’s internal system (ie, as .fxp or .aupreset files). This makes it very difficult to build up your own preset library.

Compatibility is a little iffy, too. Changing preset in Logic Pro X, for example, kills the audio output, requiring plugging and unplugging of the USB stick. In Ableton Live 10, meanwhile, the audio disintegrates at times for no apparent reason, again requiring a reconnect. Hopefully these can be ironed out with software updates, and by and large, Trueno is stable.

Despite Trueno’s undeniable success on its own terms, for us, its strange half-and-half nature outweighs the minor sonic gains it brings. It has a sound of its own, and the analogue noise, grit and wobble are palpable (indeed, overbearing at times), but using it is a bit of a faff, it has none of the tactility that’s such a big selling point for true analogue synthesis, and it doesn’t do anything compelling enough in sonic or functional terms to make us want to use it over virtual analogues costing the same or less.