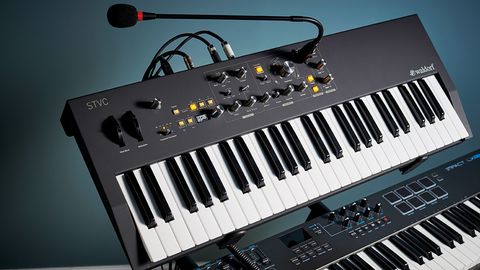 A solidly built, refreshing instrument that can transport you right back to the psychedelic ’70s or into the future

Waldorf produce a range of fantastic synths. Perhaps because they don’t market aggressively, their products often bubble away quietly in the background but speak to most people about their synths including the Blofeld, Pulse 2 and flagship Quantum and you’ll hear great things.

With a focus on elegant interface design and high quality pots and knobs (even on cheaper products), Waldorf machines have always oozed class. Their products are made in the EU too.

A few years back, Waldorf were one of the first companies to announce a dedicated string-machine emulation (digital): the Streichfett. This had its own unique voice that harked back nicely to those halcyon days where string synths such as the ARP Solina, Logan String Melody 2 and Roland RS-202 reigned – a pairing made in psychedelic heaven – were omnipresent.

Perhaps the most notable of these is the vintage Roland Vocoder Plus (VP-330) and more recently Roland’s own boutique digital clone (the VP-03) and Behringer’s analogue VC-340. With few such options available today, Waldorf have clearly spotted a niche.

Enter the STVC (short for String Vocoder, we think)! Built in a very solid all-metal enclosure, very much in the mould of their other keyboard synths (such as the Blofeld), the STVC is once again a supreme. Machines that combined a string machine alongside a vocoder very elegantly designed machine, with its charcoal grey smooth paintwork.

The keyboard is a very nice feeling four-octave affair and also has aftertouch. Having aftertouch (especially when vocoding) is a real bonus as it lets you modulate sounds without having to jump to the wheels.

Other performance controls include the slender black plastic pitch and mod wheels, envelopes in the Solo (synth) section and also classic crescendo and release (much like a Solina string machine) in the string section, along with effect rate and depth, the Tone dial and the large Registration dial which morphs between sounds in the string section (and can be animated too). This is effectively an LFO to control the rate of morphing between registrations. Great for performing!

Examining the control panel in more detail (left to right), there are five main areas. First up we have a general control section which includes a small but clear OLED screen which displays the name and number of the patch selected (three banks; two factory and one user) with a jog dial next to it and a keyboard transpose paddle lever.

Press Tweak and button A and that also leads you to system settings where you can find the vocoder mic gain (among other settings). Tweak is an interesting feature in particular – basically it accesses a modulation matrix with approximately 24 sources and 41 destinations, allowing much deeper control over the routings than is initially apparent. Sources include velocity, aftertouch, wheels, LFOs and more; plenty to go deeper with.

These sound types, while not offering the exact sounds they describe, instead offer up characters similar to their names (brighter, fuller, darker, snappier etc). These tones are much like ’70s transistor emulations – so the piano and clav sound in the ballpark of the emulations you’d find on home organs/synths of the period – just don’t expect authentic pianos or clavs as that’s not the remit here.

These sounds certainly give the STVC a unique take on things. Note that the mono mode puts the synth section into a mono/legato mode whilst ‘full’ is essentially a mono/unison stack mode.

You also have a nicely punchy ADR envelope (with two available shapes via flick switch) and a stereo tremolo for further sculpting. In terms of layering and splitting, there’s a three-position switch which allows you to place the synth section to the left or right of a user-defined split point, or when you switch to the ‘layer’ position, the synth becomes the vocoder carrier across the full keyboard range. The main features missing here are a dedicated filter and an arpeggiator.

In the middle of the panel is balance control which blends effortlessly between the solo (synth) and string sections. This allows lots of nuanced and versatile split textures between the synth, strings or vocoder or alternatively, you can go all the way to the left for just synth or all the way to the right for just strings or vocoder – and I really dig this flexible real-time approach.

Focusing on the string section, this is obviously based on the Streichfett desktop module (with pretty much the same controls) and is designed to emulate ’70s string machines (and does so nicely). The various registrations available (via the aforementioned registration dial) give a wide and continuously variable scope including choir-like sounds, straight-up classic ensemble strings and everything in between!

These nooks and crannies (between the main registrations) are where the magic really happens. The all important ensemble effect (bypassable) also works very well in practice, adding lovely swirling movement to sounds and really transports you back in time to classic stringers, (though some more detailed control over the effect itself would have been nice).

The ensemble effect is also accompanied by a warm, lush-sounding stereo chorus for a welcome alternative flavour and both effects can be combined together when the selector switch is in its mid position for super-swirly goodness!

Finally in this section, there’s an octave selector which offers up three blend/octave modes: Base, which is the normal octave setting; Both, (normal and 8va octave mixed) and 8va, (one octave higher than the base octave). Once again though, when you select the animate effect (LFO) to modulate the registrations, all sorts of new and interesting sounds appear effortlessly and the unique voice of the STVC really shines through.

The vocoder section is similarly excellent and has a very impressive 256 bands available – generally speaking, the more bands the better the diction, clarity and intelligibility and all impress here when using the supplied mic, though results become even more impressive when using an external condenser mic.

Once again, sweeping through the registrations can really pay dividends here, providing everything from classic robotic vocoding to disturbing voices and smooth poly-vocoder tones. One thing that seems to be missing for the vocoder is a monophonic mode (one of my favourite modes for singing vocoder lead lines) but perhaps that could be added in a firmware update and added to the menu system.

It’s lots of fun switching on the vocoder, adding some chorus for stereo width and messing with the registration dial in real time for some really cool evolving textures. Or alternatively, running drum beats through the external input can sound great too (or any other audio source for that matter)!

While you can run the vocoder over the full four octaves of the keyboard (and beyond, paired with a MIDI controller with greater range) I particularly enjoyed running a synth bass sound from the solo section on the left side of the keyboard and vocoder on the right and then switching between strings and vocoder whilst performing in real time – again the registration dial and tone dials are key to unlocking the real heart of this machine and these kinds of macro controls (that sweep through different settings in real time) are something I wish we saw more.

I’ve really enjoyed my time with the STVC and found it to be an inspiring, fun machine to work with that can cover a lot of sonic territory. It certainly sounds excellent and there’s enough control available to literally morph the onboard sounds into wholly new sonic territories. The genius of it is the way you can combine the three sections effortlessly in real time and the way you can also morph sounds using the tone and registration controls.

If you want classic stringer sounds, deep ambient textures and powerful synths with a great sounding vocoder in an extremely solid package with a nicely direct and intuitive user interface then check it out!

MusicRadar verdict: A solidly built, refreshing instrument that can transport you right back to the psychedelic ’70s or into the future.

"It’ll handle all the classic vintage string sounds with utter ease, and that could be enough to sell it, but the vocoder section is very capable and very classy, and while vocoders are not always in high demand, it cuts a mighty swagger in both the classic and contemporary camps."
Dave Gale, MusicTech