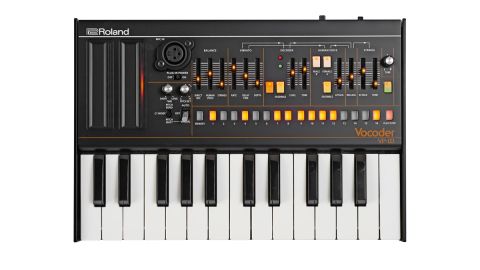 The VP-03 delivers a high-quality and authentic emulation of the VP-330's vibe; it's intuitive and well-built too.

The VP-330 Vocoder Plus (Roland's original vocoder keyboard from 1979) became popular with many major artists back in the day including Vangelis and 10cc.

Today it's very sought-after but hard to find secondhand. Wisely, Roland has now modelled the VP-330's sound and features using their acclaimed ACB technology (Analog Circuit Behaviour), adding it to the Boutique range. Let's see how it fairs!

The VP-03 comes in the same solid case as the other models in the Boutique range and is priced at £329. The case is all metal and the dials and sliders are the same type as found on the other Boutique models; once again there's a reassuring feeling of quality to all the faders and switch gear.

Like the other models, the fader tops are lit so you always have a nice visual reference of your levels at a glance. The controls don't feel as cramped as on the other Boutique models due to the more limited range of controls available and subsequent extra panel room. Power can come over USB via your computer or you can use batteries or a third-party USB power supply to power the unit. We'd have preferred an included power socket/adaptor but this is in line with the other Boutique models.

Examining the front panel, there are two ribbon controls which can be used for various functions depending on the mode selected (vibrato, formant, tempo, pitchbend/shift). We would have preferred real wheels for more accuracy but these still do the job fine.

To the right there's the XLR socket for the included gooseneck mic and this also supplies phantom power (Roland calls it 'plug in power'). This means you can use any mic you like - you'll likely want to do this as the supplied mic's gooseneck stem is way too short to be practical.

You could also plug in any other mic level source here too, or use something like a Shure A15LA in-line adaptor, so that you could plug in any synth, drum machine or other line level source. You can also use an external sound source plugged into your computer as a carrier or modulator signal over the USB connection which is a nice bonus and gives the vocoder lots more sonic versatility.

Below the mic area are controls for portamento and pitchbend/shift which add expression to your sound. You can set the portamento time and pitchshift easily, much like the original VP-330 (the polyphonic glide sounds rather lovely too!). To the right of the pitch section is a mixer section (called 'balance'). This has three sliders: one to balance the level between dry mic and vocoded mic signal, one for the human voice section level and one for the string section level. Then to the right of this section is a vibrato section where you can set the rate, delay the onset and set the depth of the vibrato (which sounds very natural and smooth); it's perfectly suited to vocal performances when vocoding.

Slap bang in the middle is the most important section: the vocoder. There's nothing written in the specs regarding the number of bands this model possesses (if it's true to the original, it has ten bands - the more bands, the better the intelligibility) but it reproduces diction very clearly and precisely.

The controls in this section are very simple, amounting to an on/off switch, level control and a basic tone (brightness) control. It's all topped off by a lush/wide-sounding ensemble effect that acts like a magic sweetening button! There's also a green light to indicate level and a red clip LED (gain is set in the menu).

Note that as the VP-03 is modelled on the VP-330, the sonics are therefore quite limited without external processing, (though you can change the formant using the second ribbon in the menu settings). It would have been nice if the vocoder section could have been expanded a little with selectable waveforms (instead of just a tone slider) and with control over specific frequency bands, along with a legato/unison mode and reverb/ delay effects too. Here's hoping for a full-size expanded keyboard version soon (yes please Roland!).

To top things off there's the VP-330's human voice and string sections which share attack and release controls. Human voice has male and female presets which can be blended together for a more choir-like sound and both settings sound lovely layered behind the vocoder and strings (there's a user-definable keyboard split point too).

The ensemble effect is included once again to widen the sound, though you can't tweak the effect itself; it's on or off. The string section gives a nicely authentic '70s string machine vibe and, once again, it can be layered with the vocoder and human voice section for more complex/interesting sounds.

The VP-03 offers up some handy advantages over the original VP-330. Firstly, there's a 16 pattern (writeable), 16-step sequencer which can be sync'd to external MIDI clock. The sequencer patterns can be backed up to a computer and the sequencer itself features shuffle, polyphonic recording per-step (up to six notes), editable note length, gate time, scale and step-order.

Also audio recording from the mic can be recorded into any step along with internal sounds, so you can use your voice (or audio from other sources) to trigger the vocoder and then record and play it back. Further, the VP-03 features a 'chord memory' function.

When the 'memory' button is lit, you can use the 16 sequencer step buttons to select different memorised chords which can then be triggered by any key on a connected keyboard. You can also record in your own favourite chords for instant recall.

The VP-03 is a great vocoder with some nice '70s-esque strings and human voice sounds, plus a handy sequencer. It's pretty faithful sonically to the original (though unsurprisingly with a little less warmth and mojo) and perhaps it's a little overpriced at £329 (as it's fairly limited). Nonetheless, it's a worthy addition to the Boutique range; now bring on the full-size expanded version!