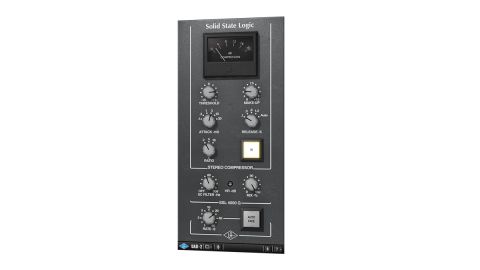 A faithful and sublimely realistic take on the classic hardware bus compressor.

A firm favourite of countless mix engineers, the iconic stereo bus compressor from the SSL 4000 G-Series mixing console is best known for its ability to ‘glue’ disparate mix elements together, providing modern punch, cohesion and transparency where it counts.

Universal Audio’s officially-endorsed, UAD-2-powered plugin emulation has been around for a fair few years now, and so following in the footsteps of their recent overhauls - such as the UAD SSL 4000 E Channel Strip Collection and the UAD Neve 88RS Channel Strip Collection - comes their modern revamp of the classic VCA compressor, now bundled with the original version to comprise the so-named ‘collection’.

As with the original hardware, the minimal controls and layout of this VCA-style device hide a self-assurance that becomes obvious when strapped across sub-groups and mixes. Dialling it in couldn’t be easier: turn Threshold (+15 to -15dB) anticlockwise to set compression, then use Gain Make-up (0-15dB) to bring the overall level back up again.

This is a compressor primarily designed for transparent smoothing. Lowering the threshold kicks the compression in, while the classic bus setting of slow attack, fast release, and a ratio of 2:1 or 4:1, gives a good transparent starting point. Tweaking the threshold to show between 2 and 4dB of gain reduction, and raising the Gain Make-up to restore program volume refines the outcome. Toggling the In/Out button is useful for smooth A/B comparison. If your mix is bass-heavy and you can hear high-frequency ducking when kick and bass hit, you may need to raise the SC Filter to reduce the impact of the low frequencies on gain reduction. The original hardware version didn’t have this, but radio mixes in the 80s were always very bright and bass-light! More extreme settings are doable on drum buses, to up the power and energy - try lowering the threshold and keeping the release fast to get things pumping.

The new additions are a Sidechain Filter (ranging from Off to 500Hz); a Mix control for parallel compression (0-100%); and a little Headroom adjuster pot, which lowers or raises the input so that the Threshold control window covers the optimal range. True to the original hardware, there’s also an Auto-Fade button and Rate control, set in seconds - although in the modern age of DAWs, we can’t imagine why anyone would choose to use this instead of drawing in regular volume automation.

Nothing but a G thang

As you’d expect, operating the SSL 4000 G is intuitive from the get go, and there are a host of presets from nine producers and engineers to use as starting points. Rightfully, what you first notice isn’t the compression working, but what it’s doing to your mix: the big ‘In’ button could just as easily be called the ‘Sounds Like a Record’ button, gluing the track together into a cohesive, united whole without sacrificing clarity.

It’s just what the original hardware did, and if anything, this new virtual version is an improvement - we found it helpful to roll off low frequencies from the input sidechain signal to eliminate high-frequency modulation or pumping; and the new Mix control is especially welcome, particularly on drum buses, allowing you to dial in more heavy-handed settings than you usually would, before mixing in the uncompressed signal to temper the effect and maintain ‘openness’.

We’re still big fans of the also-included Legacy model (and for a low-DSP version it still stands up to its purpose), but the new remodelled version is a revelation in terms of accuracy and precision. It’s not a dynamics device for every mix situation, but the indescribable glue and unification it imparts is undeniably impressive and impactive.