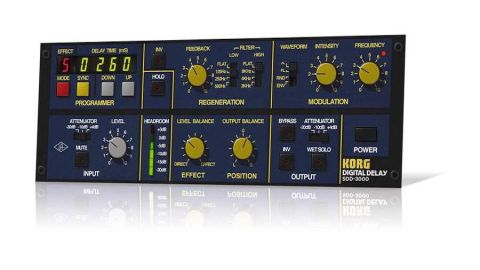 All the magic of the real SDD-3000 plus true stereo routing and tempo sync. More versatile filters wouldn’t have broken the spell, though, would they?

Produced by Universal Audio in collaboration with Korg, SDD-3000 Digital Delay is a UAD-powered emulation of the latter’s classic 80s rackmount (reborn as a stompbox in 2014) delay unit.

The original was largely responsible for one of the most recognisable guitar sounds in the history of rock - the soaring, stadium-filling echoes of U2‘s The Edge - and subsequently found favour with U2 producer Daniel Lanois and electronic music legend William Orbit, amongst others.

With its combination of analogue JRC op-amps (as used in many distortion pedals of the day) and crunchy 13-bit converters, it’s one of the most instantly identifiable delays ever made.

Universal Audio’s plugin (VST/AU/AAX/RTAS) remake of the SDD-3000 aims to accurately model every aspect of the real thing (minus the CV and footswitch inputs), while adding better stereo compatibility and, of course, tempo sync.

At the start of the signal flow, the Attenuator switch sets the input level gain compensation to +4dB, -10dB or -30dB, while -20dB, -10dB and +4dB options offer level adjustment at the output. At -30dB, the modelled preamp applies wonderfully gritty saturation as the Level knob is turned clockwise. It’s also available as a Unison plugin for UAD Apollo users, emulated within the interface itself for zero-latency tracking through it.

Like the real SDD-3000, the Delay Time (incrementally adjusted with the Up and Down buttons, or entered directly) ranges from 1 to 1023ms. Unlike the hardware, though, the plugin can also sync to host, with a menu offering all the usual regular, dotted and triplet divisions from 1/2 to 1/64, as well as 5/16 and 5/32.

The Feedback circuit includes Low- and High- pass filters for simple frequency shaping, each with three fixed cutoff frequencies. High Feedback settings quickly degenerate to a gloriously filthy wash, and we’d have really appreciated enhancement of the filters beyond the original spec to take in a wider range of cutoffs - or even an upgrade to continuous knobs for real-time play. Sacrilege, we know...

The original SDD-3000 rackmount featured three output jacks, which could be panned in various combinations to output its processed mono source in mono or two types of stereo. Needless to say, the plugin covers all of the original configurations, but, as you’d hope, it also adds to them with a stereo in/stereo out mode and a L/R Balance knob.

The stereo setup is selected by clicking the Mode button or the faux LED above it, and there are five to choose from. The first is your basic Mono In/Mono Out, while Mode 2 sends the summed signal to one side and the out-of- phase difference to the other for stereoising of mono input. Modes 3 and 4 output the dry signal on one channel (left for Mode 3, right for Mode 4) and wet on the other (vice versa) - release your inner guitar god!

Finally, Mode 5 simply maintains the L/R image between input and output, enabling regular stereo usage. Well, they’d have been mad not to, clearly.

The Hold button repeats the full 1023ms buffer continuously when engaged - useful for textural and looping effects. Again, the implementation of sweepable filters would have made a hugely beneficial improvement here.

In the Modulation section, the Delay time can be modulated by an internal LFO or envelope follower, for chorusing, flanging and other pitching effects. Triangle, square and random LFO waveshapes are onboard, and the LFO frequency tops out at a nippy-enough 15Hz.

Universal Audio’s virtual SDD-3000 truly nails the functional specifics of the original hardware - for better and worse. We can’t help but wish the company had taken a few more liberties with regard to modernising it, most notably those fixed filter frequencies - UA added tempo sync and true stereo, after all.

That said, what matters most here are the sound, musicality and easy workflow, all of which have been captured perfectly, making SDD-3000 another worthy addition to the UAD Powered Plugins roster, particularly for retro-minded guitarists and producers.