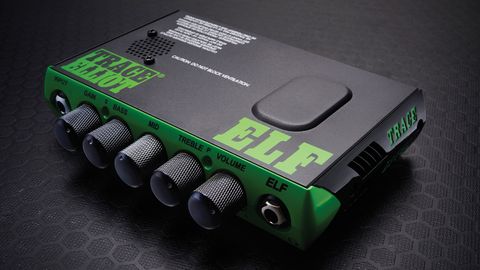 Two hundred watts from an amp that can fit in your back pocket? Surely not.

Well, Trace Elliot’s tiny Elf does indeed slip into your jeans (we’ve tried it!), but inevitably there have been many scoffers about its supposed power. So does it stand up to the claims or not? Armed with a Peavey Headliner 2x10 cabinet, we checked it out.

Before we start, please cast any thoughts of Trace Elliot gear from the 80s to the back of your mind. The dimensions of this amp mean that it can’t realistically recreate the legendary bass tones that made Trace’s fortunes: instead, think of this amp as a completely new prospect.

This is no shabbily-assembled unit; the Elf feels sturdy and rugged in its metal casing, much like the Trace Elliot gear of yesteryear. The five metal controls (Gain, Bass, Middle, Treble and Volume) are very sturdily attached, flanked by input and headphone sockets with venting to both sides and the top panel.

A quick glance at the back reveals the on/off switch with a single jack output socket, a ground lift switch and XLR DI socket. For those disappointed by the lack of a Speakon output, there isn’t space on the chassis - so either obtain a jack/Speakon cable, or if your cabinet allows a jack connection through the Speakon socket, go with that.

Tested with a 2x10 cabinet at home, our initial findings suggested that the EQ offered plenty of scope, although the treble response felt a little muted and lacking in glassiness. The bass end was solid, however, while the midrange offered a throaty bark, and using the amp with a cab fitted with a tweeter definitely improved the treble response.

An inbuilt compressor comes into play if your input signal is fairly hot (indicated by the level LED turning red) and should you wish to implement some overdrive, boost the Gain to full. Do that with the Volume control set at and then increase the volume very slightly, otherwise feedback may occur.

To test the Elf properly, we used it on several large pub gigs with a four-piece band as well as at rehearsals. Equipped with an EBS Neo 2x12 cab, the Elf did extremely well, more than keeping up with a live kit and a raucous guitarist - we didn’t need to push the amp even close to halfway.

It became warm to the touch after heavy usage, but Trace assure us that this is to be expected - and there is an inbuilt fan. Some EQ tweaks were required to deal with the room at each gig, but the Elf’s ability to provide a high level of projection, plus solid and punchy bass tones, was impressive.

This is a very impressive amp for the price: note that at the time of going to press, there are attractive online deals. Two minus points would be the vague indicator markings on the controls and the lack of an Aux In socket: these would have made this the ideal practice tool.

Otherwise, we can heartily recommend the Elf as a ‘plug and play’ amp, ideal for those playing small to medium gigs, and its portability will win it many admirers.