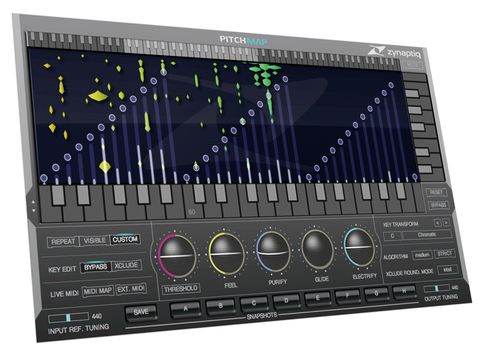 Getting good results takes patience and practice but PITCHMAP is flexible and useful.

Zynaptiq is a new arrival in the music production DSP field, and has already garnered much attention with its 'real-time polyphonic pitch processor'.

PITCHMAP is installed as both a standalone app and AudioUnit plug-in, and utilises a simple authorisation code unlocking system. Although it's Mac-only at the moment, we're reliably informed that, although Zynaptiq isn't specifying an exact date, VST and AAX support will be added later in the year, as well as a version for Windows.

"In practice PITCHMAP requires a reasonable degree of user intervention to get the best results."

PITCHMAP attempts to separate musical signals into their constituent elements (including harmonics and transients), so they can be removed or changed. Depending on the settings, you can correct the tuning of parts of a full mix, remove incorrect notes, change the key of a track or adjust individual melodic lines.

On starting PITCHMAP (or inserting it as a plug-in in your DAW), you're greeted by a small central window containing a spectrogram-style display, a selection of knobs and buttons, and no less than three piano keyboards (for determining pitch processing note range, bypass or exclusion of individual notes, and retuning - something that can also be done dynamically under MIDI control).

Like its compatriot, Celemony's Melodyne DNA, PITCHMAP is a product that promises much, and on paper (and in the demos), produces great results when applied to a range of pitch-correction tasks.

Similarly, in practice PITCHMAP requires a reasonable degree of user intervention to get the best results. In fact, this element of its use should not be underestimated.

Combined with the need to learn what each control does (though aided by the information included when hovering over a parameter), and the rather small main display window, PITCHMAP is by no means a 'set and forget' processor.

It's inevitable that we'll see more processors like this in the future, as they're a natural extension to monophonic pitch correction. However, they do throw up a few questions.

In day-to-day recording scenarios, it's usually easier to re-record an individual part than correct its pitch within the context of a full mix. The next best thing is to correct it separately from other recorded parts.

PITCHMAP is predominantly for those times when there's no possibility of accessing the separate elements. Extreme sample manipulation and remixing are two examples.

For these, and perhaps film post-production, it's a great tool, though at about £325, not a frivolous purchase. However, it does open up a world of possibilities given a bit of time and effort.