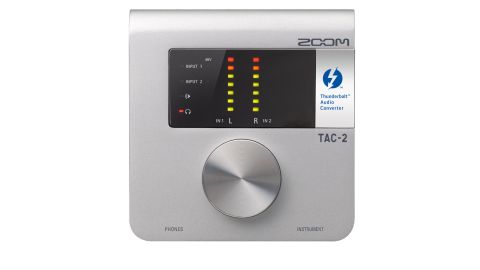 If you don't need lots of channels and fancy finally taking advantage of your Thunderbolt port, the TAC-2 is something of a revelation - a great performer in a compact package.

Zoom's 2-in/2-out TAC-2 arrives as a rival to the likes of Focusrite's USB Forte, offering the performance benefits of the ultra-fast Thunderbolt bus without breaking the bank.

At 129.5x120x51.3mm, the TAC-2 is a pretty small unit. It sits at a shallow angle and feels solid enough despite the rather wobbly rotary/ button, which is used to switch between and control input, monitor out and headphone levels.

The display comprises a stack of red LEDs, indicating the rotary's current target and whether or not 48V phantom power is being fed to the two inputs, and two seven-segment LED ladders for level metering. Thankfully, you also get a Thunderbolt cable in the box.

The back panel houses two balanced outs and two balanced mic/instrument ins, while the front plays host to a headphone output and a guitar input.

Operational and phantom power are both supplied via the Thunderbolt bus, so there's no need for an external power supply - that alone will be a big selling point for many over USB interfaces, which usually have to be plugged into the mains for phantom power.

Software control and monitor mixing is handled by the MixEfx application, which offers such delights as low-cut filters and phase invert switches on the inputs, some passable monitoring effects (three reverbs and a delay), and three memory locations.

Capturing and playing back audio at up to 24-bit/192kHz, the TAC-2 sounds fantastic and records well. Latency figures are impressive, dropping as low as 1.5ms at 32 samples (at a 44.1kHz sample rate) in Logic Pro X. That's much lower than any USB interface - the high-end model we pitted it against managed 5.2ms at the same buffer size. The TAC-2 also took up a little less CPU overhead.

On the downside, the metering is a bit low-res (a few more segments would make all the difference), the stepped rotary isn't good for fine level changes, and despite being the cheapest Thunderbolt interface money can currently buy, you can still get a lot more I/O for your money with USB.