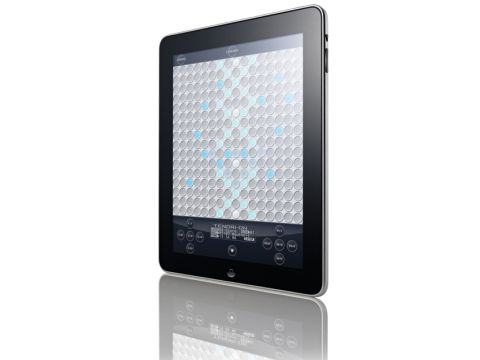 Your chance to finally get with the Tenori program. Cheap, fun and mind-wideningly inspiring.

We have a love/hate relationship with the Yamaha Tenori-on, the magnesium-framed, hand-held, light and button encrusted synth 'n' sequencer from 2007.

We love that Yamaha still go balls out to be so 'out there'. But we can't forgive them for not putting a cheaper Tenori into more hands. In fact, it's taken Apple's iPad for the whole daft idea to finally make sense.

Tenori-on is basically a grid of 16 by 16 buttons. Left to right is time and up and down is pitch. You select a button by pressing it, it lights up and when the sequencer loops left to right it triggers its note. Simple.

There are 256 tones to chose from (one per button) and 16 'layers' each with it's own sequence and tone. And there are 16 'blocks' with which to build tunes.

With no sense of 'keyboard' or musical scale it's amazing how quickly your established, well thought out method of writing becomes 'let's make a pretty pattern' and 'don't put two notes next to each other because that sounds bad.'

Within minutes, you're making music that would literally never have happened on any other device. Strengthening this feeling is the unique tone set on board.

The default gate time is short 16th notes for simplicity, so at least 60% of the tones on offer are simple synthesizer 'chiffs' 'blips' and 'beeps'. Tracks are therefore always very… Tenori.

The hardware version did allow you to import (short) audio samples via SD card for use in compositions, most usefully being able to put your own 'proper' drum sounds in the unit, rather than the quirky, reverb-drenched thuds and wood blocks that dominate here. Right now this is missing, but is surely just a software update away.

The good news is, app updates are easier to implement than hardware ones so we expect Yamaha to respond thick and fast to any user requests. Either way these are petty gripes on one of our favourite music-making apps.

We'll never get over the fact that Yamaha never did make the £200 Tenori we begged for, but giving us an easier to use, future expandable version for £14 kind of makes up for it.