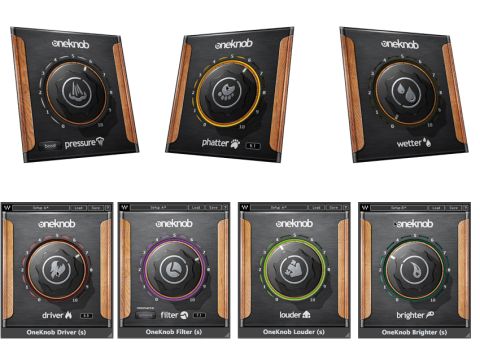 Some well-implemented concepts but may leave you wanting more than a one-stop solution.

We all know how it feels to occasionally drown in parameters. We pop open the GUI of a plug-in only to be dazzled by its array of options and might lament the time lost to seeking the right one.

Waves' OneKnob range of seven processors seeks to change such moments by offering a suite with just one parameter each and thereby make output channel and in-channel processing easier than ever before. Can such a simple concept work?

Working through the plug-ins alphabetically, Brighter comes ﬁrst. The attractively designed one dial approach allows you to add extra treble, which lifts the mix and pleasingly, doesn't go too crazy, offering a musical result at even the most extreme settings.

The same can't be said for Driver, whose job it is to provide overdrive with anything from soft saturation to raspy meltdown on offer.

While only the gentlest settings could ever suit an output channel solution, this processor could certainly do a job in-channel on a range of instruments.

Filter is a low-pass tone plug-in and provides a second tweakable parameter in the form of a Resonance button that can be toggled between 'None', 'Moderate', 'High' and 'Extreme'.

The travel is very smooth on the ﬁlter ramp and the resonance names live up to their billing as you'll hear below - there's plenty present, even with the Moderate setting.

Louder is OneKnob's Limiter that, surprisingly, doesn't feature an output ceiling control. Below you'll hear it just below its halfway point and already artefacts are building up with audible distortion, despite the signal not clipping past 0dB.

Waves say that Limiter automatically makes up gain and can increase RMS by up to 24dB but it comfortably pushed into the red in my tests if we drove it hard, so its fair to say that this wouldn't be our output limiter processor of choice.

Phatter comes next, which is OneKnob's Bass Booster. At extreme settings this also provides whopping amounts of drive as the DVD will testify but at gentler settings, it lifts bass nicely, providing punch and drive without over-mudding the sounds you're processing.

Again, this will be best used in-channel as if you're needing to lift bass too much at the output stage, you probably need to go back and check your unprocessed mix.

Rounding off the range are Pressure and Wetter. The former is a compressor ideally suited to drum busses which is capable of thickening and adding punch, or heading into monstrous, over-pumped territory and sounds nicely versatile at intermediate settings.

The latter is OneKnob's reverb solution that increases reverb time and brightness as the dial turns. With so many DAWs now offering their own, highly customisable reverb plug-ins, we don't feel this process translates well to the OneKnob approach.

The release of OneKnob represents a daring move for Waves as the simplicity of these plug-ins will open them up to criticism that their features slightly patronise all but rookie producers.

If they were exclusively aimed at mastering engineers, as their price compares with fully-spec'd suites, we'd be reluctant to recommend them to anyone who enjoys full sonic tweakability.

Some processors here, however, do sound good and work nicely in-channel, so if you prize simplicity over a comprehensive toolset, OneKnob might suit you.