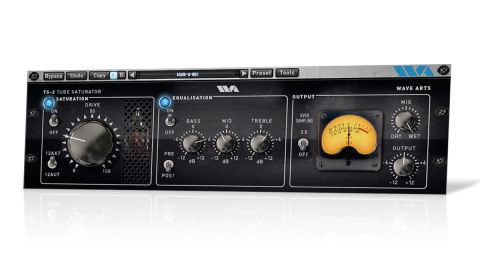 Wave Arts' original Tube Saturator plugin promised to faithfully recreate the effect of vacuum tube saturation, with the caveat that it took an unusually high toll on the host DAW's CPU.

The justification? Tube Saturator's algorithms were/are real-time adaptations of analogue circuit modelling technology. In other words, Wave Arts painstakingly modelled the voltages and currents through every tube, resistor and capacitor of a dual-stage triode preamp with three bands of analogue EQ, in a bid to capture every last detail of the real thing.

Tube Saturator 2 (VST/AU/AAX) sports a brand new GUI and is essentially a continuation of the mission embarked upon by its forebear, the aforementioned preamp/EQ circuit emulation. The intended usage ranges from adding subtle warmth to driving into aggressive fuzzbox territory, with a broad palette of moderate saturation effects in between.

This time around, however, Wave Arts claim to have made their code around seven times more efficient - and we can happily report that version 2 is anything but a CPU hog.

Operation typically begins with the large Drive dial, which essentially governs the amount of distortion - the more you push it, the brighter the orange valve on the interface glows and the crunchier the audio becomes.

The drive is level-compensated so that the distorted signal remains at roughly the same level as the dry signal, which is particularly handy as one of Tube Saturator 2's new features is a Dry/Wet mix knob for parallel processing.

The differences between these two sonic personalities make the plugin useful on a more diverse list of instruments than you might assume. Drums and percussion sound particularly tasty when driven to the point of breaking up slightly, but when used at softer settings, Tube Saturator 2 is a beast on vocals, bass and synths.

Actually, there's something ever so slightly unconvincing about the effect when used at the most extreme settings, but we found that the Dry/Wet mix provided a more than adequate solution, restoring a natural air to the source material without relenting on that chewy, greasy crunch factor. There's now also the option to engage 2x oversampling for both the saturation and EQ, reducing aliasing and adding to the realism.

One of our favourite things about Tube Saturator 2 is the Equalisation section. The middle band has a centre frequency around 800Hz, while the outer Bass and Treble bands are based on smooth Baxandall filters with corner frequencies at 100Hz and 1kHz, respectively.

Tube Saturator 2's real strongest point, though, remains its sound.All EQ bands can cut or boost by up to 12dB, and new in version 2 is the ability to route the EQ to be placed in the signal chain either before or after the Drive section, so you can EQ the signal running into the virtual tubes or shape the sound after it's been saturated.

The addition of the Dry/Wet mix knob means that Tube Saturator 2 can double up as a basic parallel EQ. This technique can produce a very sweet sound and tends to be even more effective when the EQed signal is saturated. Having said that, though, the Drive section can now be bypassed, so you can choose to eschew the distortion entirely if you like.

Other handy features include a final output knob with +/-12dB range, a VU meter, the ability to import presets from the previous version, and A/B state switching.

Tube Saturator 2's real strongest point, though, remains its sound, which is now combined with impressive efficiency. It might not be the only saturation effect you'll ever need, but if you're looking for another flavour of analogue-style distortion to add vibe and energy to your digital mixes, this is certainly a plugin worth checking out.