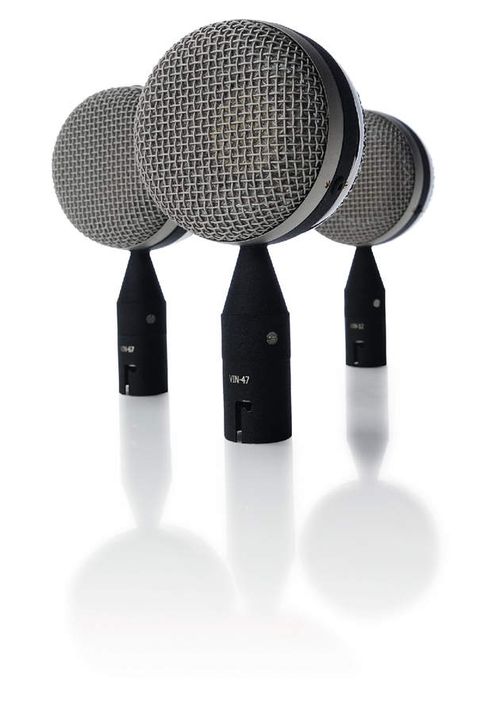 It's very hard not to like this flexible package from Violet, and it won't break the bank either.

Swapping mic capsules is commonplace with smaller condensers. But the same process with large capsules has never achieved the same level of success.

And yet the ﬂexibility of this approach has many advantages, not least the fact that you can have loads of choice for less money. With this in mind, premier mic manufacturer Violet Designs has produced its very own universal mic preamp.

Designed to work with their own VIN series interchangeable capsule heads (a choice of eight produced by sister company JZ Recording Equipment), but also compatible with Neumann's vintage M-series and the B-series heads produced for the Blue Bottle Mic, this compact and unassuming little preamp opens up a whole new world of mic design.

But because it uses modern transformerless class-A electronics (and not the valve preamps used historically), it's also a more robust, reliable, portable and affordable option. If all that doesn't capture your imagination, they're also bundling the pre with their VIN26 capsule for a reduced price tag of £725, delivering a lot of mic for not much money.

Given the amazing mic deals out there, spending more than a few hundred pounds on a mic has become much more of a consideration than it used to be. Having tried a number of Violet mics in the past, it's worth saying at the outset that in my experience they're all extremely well made and presented.

They also deliver where it counts, with excellent sound and specs. Furthermore, their pricing isn't as stratospheric as other boutique manufacturers out there.

Given you can couple it with various capsule heads, some elements of the Global Pre's performance will vary from capsule to capsule. But in basic terms, it requires standard 48-volt phantom power (+/- 4 volts), working best into a load impedance greater than 250 Ohms.

On the spec front it manages a 130dB dynamic range with a linear frequency response from 5Hz to 50kHz. Much like their Globe condenser mic, it also incorporates the rather discreet 'GSM' shock mount.

For added isolation each of their 'lollipop' capsules also incorporates internal rubber damping. You'll see that each capsule comes with removable screws to protect it in transit. You'll need to remove these before you start recording (whether you choose to use them after that is entirely up to you).

The review package arrived with four individually boxed VIN-style heads, featuring four of their more commonplace cardioid capsules - VD12, VD26, VD47 and VD67. Each head incorporates a spring-and-latch design, not dissimilar to the holder for a bayonet light ﬁtting.

In use this makes swapping heads quick, although it's worth reminding yourself to power down the phantom ﬁrst. Of the four capsules (aside from the 26), each wears its sonic heritage clearly on its sleeve through the naming. As noted above, the VIN26 is the head included in their bundle, but it also uses the same capsule you'll ﬁnd in their Amethyst Standard mic.

Delivering a combination of midrange presence (boosting around 2kHz) and high frequency lift (to 10kHz and beyond), it's a modern-sounding mic. In use this makes it great for delivering up-front vocals or speech, and I think it delivers a great close mic instrument sound that's difﬁcult to beat.

Sonically the furthest from this is the VIN47. Featuring the same midrange boost you'd associate with a Neumann U47, this also uses a dual diaphragm capsule like many of the classic vintage mics. In use the sound is the warmest on offer here, and is great for taming complex high frequencies without losing any presence. The other dual diaphragm capsule is in the VIN67.

On balance I think this might be my favourite. With a slightly more subtle presence boost than the 26, it still sounds upfront, but a little less in your face. Certainly it's reminiscent of Neumann's U67, but without the associated valve electronics of course.

Finally, the VIN12 delivers what can only be described as a glossy sound. This is achieved with a hefty high frequency lift, and in use the accompanying mid-range presence boost isn't that obvious.

If you're looking to add a bit of sparkle at your source, then this is deﬁnitely the capsule you want. The VIN12 is my second favourite capsule of the bunch, if only because -for many different voice types - it will deliver either layers of backing vocals or a killer lead vocal sound straight out of the box.

Violet's Global Pre is a great idea, and although there are other modern options that do the same sort of thing, no one does it in quite the same way. What's more, with capsules available courtesy of JZ carrying a ﬁve-year guarantee, these mics make a sound investment.

But it's worth saying that, although many of the capsules deliver similar sounds to a number of famous vintage mics, they haven't literally copied those mics.

Often vintage mics would use their twin diaphragm capsules to achieve multiple polar patterns, whereas the Global Pre only delivers a single- pattern option. Equally, as mentioned, this is a solid-state design, and many of the coveted classics are valves.

Even so, you can't knock this combo for style, ﬂexibility and value for money. You'd be hard pushed to better that from any other manufacturer.