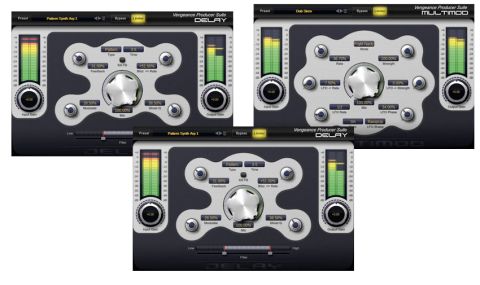 A great sound and impressive price, but Essential FX offers little functionality that you probably don't already have.

Vengeance-Sound pretty much wrote the rulebook for contemporary club samples, becoming the go-to sound source for many producers of recent times. It began its move into plugin development with the excellent Multiband Sidechain and has since released such gems as the splendid Philta XL and the Metrum kick drum synthesiser.

For its latest venture, Essential FX Bundle, Vengeance has kept its attention on processing, putting together a collection of 15 simple plugins (VST/AU/RTAS) dubbed Essential FX. Once again, it's produced in collaboration with software designers Keilwerth Audio.

The pack covers every base from EQ and dynamics to modulation and reverb. Rather than lump processes together, each plugin serves a pretty specific purpose, so there's an EQ, three reverbs (Gated Reverb, Trash Verb and Impulse), a separate Limiter and Compressor, Delay, two distortions (one normal, one Multiband), four modulation effects (Chorus, Flanger, Phaser and Multi Mod), a Bitcrusher and Stereo Matrix (for mid/side manipulation).

All of the plugins share a consistent GUI, with all but the EQ and Limiter centred on a large Mix control. The interface takes a very 'what you see is what you get' approach, which makes for easy use, and although the vast majority of parameter entry is done via knobs, three of the plugins (EQ, Impulse and Multiband Distortion) also include some display-based editing.

Although there is a dedicated Limiter, every plugin also features an integrated output limiter with adjustable release time. The Release setting and gain reduction meter can be found on the Settings page, alongside the patch preset path.

The first three of Essential FX's modulation plugins (Chorus, Flanger and Phaser) successfully cover their designated effects. They sound pretty good, although the Phaser and Flanger would benefit from a tempo sync option (we understand this is coming in a future update).

However, the real gem in modulation here is Multi Mod. Not only does it include LFO tempo sync and six LFO shapes, but it also has four separate operational modes: Ring Modulation, Autopan, Frequency Modulation and Frequency Modulation Nasty. Rate and Strength settings vary in behaviour between modes, with FM Nasty capable of producing the most extreme twangy effects. Couple this with some additional LFO modulation and you get into very interesting 'metallic' territory.

Further effects are ably demonstrated across the 43 presets. Like we said, the main Rate setting can't be synced; however, the secondary LFO does allow this. It isn't a huge issue, except in Autopan mode, where tempo sync would certainly be beneficial.

Moving on, the Delay is also very well conceived. You get eight overall modes, including CrossOver, PingPong and Pattern (more on this later), with high- and low-pass filtering of the delay signal on the bottom slider.

However, our favourite controls are Bitcrusher / Rate Reduction and Ghost Q. Both degrade the delay signal, with Ghost Q progressively narrowing the frequency range. As mentioned, Pattern mode is also great, with 12 very useable preset patterns on board.

The best of the rest

Essential FX's two distortion plugins are both of the 'clip' variety, producing pretty similar edgy distortion. However, the 3-band version enables individual amount, gain and even mute controls for each band, so you can get pretty focused with it in terms of frequency-specific response. Further signal degradation can be achieved using the Bitcrusher, which reduces bit depth and sample rate.

As mentioned, all of the Essential FX plugins include an output limiter, and there's also a standalone Limiter plugin. This offers nothing extra beyond the integrated one, but we appreciate having one to strap across the master channel or anywhere else we may require it. While we're on the 'purely functional', Stereo Matrix gives control over mid/side balance, complete with left and right delay controls for very short L/R offset (up to 25ms).

Rounding off Essential FX are Compressor and Equalizer. Both hold no surprises, although the former includes a welcome Auto gain make-up setting, as well as the now-ubiquitous Mix control for parallel compression. Beyond this, though, Compressor is a little short on extras and would benefit from a knee shape setting, an external sidechain, and maybe some vintage hardware emulation modes.

Equalizer is also simple, but in contrast to the compressor, it's great fun to use. All four bands can be set to any of five shapes (high-pass, low- pass, peak, high-shelf and low-shelf), and the display includes both a frequency analyser and a graphical curve editor with a neat node system, where the outer ring is used to adjust the Q setting.

All told, Essential FX is exactly what it claims to be: a comprehensive collection of 'essential' effects processors. It's not a massively powerful package - it largely covers the same ground as your standard DAW-bundled effects, and some of the plugins lack the depth you'd find in more expensive alternatives, of course. Despite all that, though, they are incredibly easy to use and work with, and the price is very competitive.