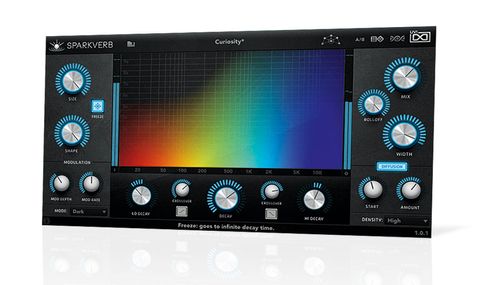 With its quality sound, easy interface and Preset Voyager system, Sparkverb is a welcome addition to the reverb pantheon.

It's got a strong reputation with ROMplers, but with the launch of Sparkverb, UVI is entering the world of effects plugins for the first time.

Although simulating the effect of sound waves reflecting off complex surfaces in DSP code is no easy task, the quality of algorithmic reverb plugins has risen dramatically in the last few years. Many of the current generation offer flexible controls and sound quality that easily compete with the classic hardware units of old.

UVI is the latest company brave enough to step into this extremely well-populated arena, having already established itself as an award-winning producer of stellar ROMplers. So, here we have Sparkverb, a reverb plugin (VST/AU/AAX) with more than a few unique and interesting features onboard...

The reason for the name Sparkverb becomes obvious once you've spent a bit of time with it: it's largely intended as a tool for streamlining the creative process behind applying reverb to an audio signal - ie, it sparks ideas.

This side of it is largely handled by the spectral display/editor in the center of the GUI, which gives good visual feedback on decay times, either global or split into low, mid and high frequency bands, as well as an alternative (to the main rotary controls) means by which to adjust them.

Despite being pretty flexible, all Sparkverb's controls are cleanly laid out on a single screen rather than divided up between multiple pages. Instead of offering a selection of fixed room modes (hall, stadium, etc), it sports the continuous Shape control, which determines the basic style of the decay.

This works in conjunction with the Size knob, which dials in dimensions ranging from claustrophobic cupboards to huge, daunting soundscapes. The results can be fairly realistic, but we found the plugin most effective when approached with no preconceptions of realism in terms of what a reverberant space "should be".

Aiding in the creation of lush, in-your-face reverbs, the Modulation section gives you Rate and Depth controls with which to add rich LFO- controlled movement. Three "room simulation" modes are on hand for tailoring the fidelity of the reverb tails: Bright gives a modern, transparent sound; Dark uses extra high-frequency damping for a cleaner sound; and Lo-Fi is a little crunchier than Dark (reminiscent of - though not really the same as - classic hardware reverb boxes).

Finally, the Freeze switch puts the plugin into an Eventide-style "infinite decay" mode (with the input gain reduced so as to avoid audio pile- ups). As on other reverbs with this feature, it is great fun to play with and an incredibly potent sound design tool.

Incidentally, the plugin also automatically maps itself to multichannel setups (5.1 surround, for example), giving decorrelated reverb signals in each channel and making it ideal for movie and game soundtracking.

Sparkverb is a serious all-rounder, capable of invoking all manner of virtual spaces, from tight ambiences to concert halls and vast "deep space"-style effects. As versatile as it is, though, the overall character is always smooth and clean, with plenty of stereo width as required. And as well as sounding fantastic, it's one of the most immediately creative reverb plugins we've come across to date.

If you regularly find yourself wanting to venture beyond the conventional sounds of your average algorithmic reverb and the realistic spaces offered by impulse-based convolution 'verbs, then SparkVerb could be just the ticket.