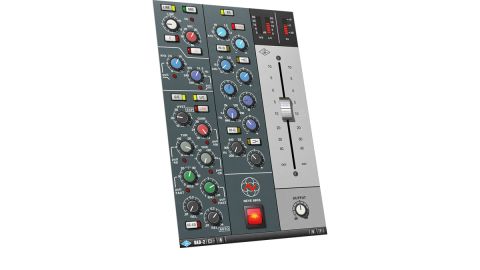 The first officially-endorsed Marshall plug-in is a coup and the new 88RS is sumptuous.

The latest update to UAD's software, Version 8.1, offers three new plug-ins, with very different aims in mind. The first is a revision to its Neve 88RS channel strip processor, the original of which has been a UAD stalwart since its release in 2007.

An awful lot has happened to Universal Audio's digital division since then, not least the advent of its UAD-2 platform. This has seen not only the release of new plug-in titles but also a thorough re-coding of others, which have benefited from much closer modelling and the extra processing power required to achieve this.

'Unison' technology - aimed at the tracking stage through Universal Audio's Apollo interfaces - has also emerged far more recently and, with the release of the 88RS Channel Strip Collection, UAD are addressing these two key criteria with one stroke.

The revised 88RS is devised not only to sound much closer to the original hardware but it's also available to Apollo owners to create a 'virtual console', which models the hardware's preamp stage as well as its tone and dynamics modules.

The 88RS MkII, like its predecessor, organises its channel strip controls into neat modules. The top left-hand corner now introduces the preamp stage, with Line and Mic options for those tracking through it, complete with Phase Invert and 20dB pad options. Below this, the tone-shaping controls begin, with high and low filters, while the Gate/ Expansion and Limiter/Compressor options complete the left-hand side.

These modules can be independently activated and what soon becomes clear is how musically the compressor, in particular, responds to input sources. Of course, you can gently tickle a sound if you like but the new 88RS responds extremely well and - more importantly - extremely musically when you start to squeeze dynamics harder.

To the right lies the EQ section which can be 're-ordered' to operate before the dynamics controls via the P(re)-Dyn(amics) button if you wish. Otherwise, as with the Compressor section, UAD have clearly devoted an awful lot of time to studying the tonal performance of the Neve console, with much more of its trademark sound oozing from this plug-in than from its predecessor.

Here, suddenly, is the trademark Neve air and warmth but also plenty of muscle at lower frequencies, if that's what's needed. Far better metering is now provided too, not only for overall output volume (which can now be controlled by a long-throw fader) but also Gate/Expand and Compressor/Limiter levels, lending better visual feedback.

As with several of UAD's recent 'remakes' of earlier titles, there is a more substantial cost to your processing cores; the revised 88RS uses approximately ten times the processing power of its predecessor (which is bundled here for 'lite' and backwards- compatibility requirements).

If your UAD system can bear the weight, though, there's no doubt that in terms of sonic performance, the two plug-ins are almost incomparable in quality.

Softube's CL 1B plug-in is an emulation of the Tube-Tech hardware and, while it's been available natively for some time, like the Sonnox EQ before it, it now joins UAD's partner program to make the leap to the UAD platform.

This is a smooth, warm Opto compressor which is capable of bite and pump but which is more at home offering gentler, creamier treatments. It excels particularly on acoustic sound sources, adding natural warmth and colour to vocals and acoustic guitars, while it's also adept at taming either individual drum kit pieces or working well across a full drum buss. The layout is clear, with Gain, Ratio, Threshold, Attack and Release dials with a three-stage selector dial allowing you to control Attack and Release behaviour.

The compressor has something of a modern hit-making reputation, as it's been 'outed' as being part of the vocal chain for artists such as Rihanna and Kanye West.

Following on from the stomp boxes of UAD 8.0's release, plug-ins aimed at axe-wielders continue to arrive apace. Version 8.1 provides an emulation of the Marshall Plexi Super Lead 1959, which has been created by Softube exclusively for the UAD platform.

The plug-in is also available via Unison technology for those wishing to track through Apollo en route to the DAW and it falls into two discrete, if related, sections.

On the right-hand side, you'll find the Channel Strip, which offers alternative ways of mic'ing the amp to the left. The presets provide Dynamic, FET and Valve options per amp set-up, which in turn translate to specific, clearly-labelled microphone set-ups, which are independently controllable with volume faders and pan dials.

Above this are master Volume and Tone controls, with Low and High EQ dials. To the left, the Super Lead amp is emulated, which Marshall lent to Softube directly from their own museum.

This was paired with a 1960BHW 4x12 cabinet, with rock production legend Tony Platt enlisted to choose the microphone combinations offered at the channel strip stage.

Marshall's name is synonymous with heavily distorted rock guitar sounds and the plug-in does a good job of recreating a huge range of these. However, it's just as adept at providing overdriven parallel treatments for a huge range of input sources - vocals, drums, basses and synths to name but a few.

Both of these plug-ins (as well as the CL 1B) sound great and the 88RS, in particular, is a giant sonic leap forward from its predecessor. UAD's plug-ins aren't cheap and require UA hardware to run, but, make no mistake, they're all of sumptuous quality.