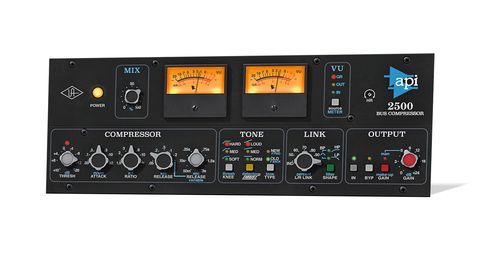 The API 2500 is a fabulous and extremely flexible compressor that's been excellently emulated by the Universal Audio team.

API's 2500 bus compressor is a classic workhorse processor and is the latest fully-endorsed emulation from Universal Audio's in-house team.

The 2500 is a modern VCA design, and while VCAs are often lambasted as clinical rather than characterful, the API sits shoulder to shoulder with equally revered VCA compressors such as SSL's Bus Compressor and Neve's 33609. In fact, the 2500 is one of the most flexible bus compressors available.

The UAD emulation retains all the features of the hardware aside from the left/right 'tilt' tweaker (you can use your DAW's pan pot to do this). The plugin's layout is slightly different, and there's an operating-level headroom tweaker (HR), and a Mix blend for parallel processing.

But the 2500's special ingredient is the suitably named Tone section. Here you'll find three knee options (Hard, Medium, Soft) alongside Thrust, which modifies the detector signal, and Type, which sets the detector signal flow as either New (feedforward) or Old (feedback).

But there are many other influences on a compressor's design and behaviour, and there are plenty of feedback style compressors (Urei's 1176, for example) that can hardly be described as gentle or laid-back.

On the API 2500, the feedback Type does influence the behaviour, making the circuit more responsive, particularly when compressing harder or transient-heavy sounds. But the differences are not always as marked as you might imagine.

The stereo Link section provides flexibility not only in the amount of linking (independent up to 100%), but also the frequency content that is linked. Here the Shape buttons, which have low-pass, high-pass and band-pass options, provide yet more ways to fine-tune the nature of the linked sidechain.

The API 2500 is an incredibly flexible tool, and with knee set to Soft, Thrust set to Norm, and the Old feedback setting, it behaves very much like a classic bus compressor, with a low to medium ratio and medium attack delivering excellent mix glue and gain reduction of a few dBs.

If you want to go further, there are many options. The superfast Attack times (30, 100 and 300ms) can help reshape the attack envelope of sounds, and this can be altered further with the Knee shape.

What's more, there's a fine-tune option for the Release (Variable), good for tweaking envelopes of transients. With ratios up to limiting (inf), there's plenty of scope to really hammer sounds. We found at extreme settings like these, New (feedforward) was the more responsive mode.

All degrees of compression can be further influenced using the Medium and Loud Thrust modes. In both cases, a filter is applied to the sidechain, cutting lows and boosting highs (Loud is the more extreme setting), making the compression less sensitive to low frequencies and more sensitive to high frequencies. On mixes and subgroups, this helped us reduce pumping whilst retaining punch, and on individual sounds it added further reshaping options, by curtailing high frequencies and retaining punch.

Overall, it's unsurprising that the API 2500 is a wonderful tool for mix bus and sub group duties, but it's also excellent for individual sounds, making it one of the most flexible compressors you can buy. Another top-class plugin from the Universal Audio stable.