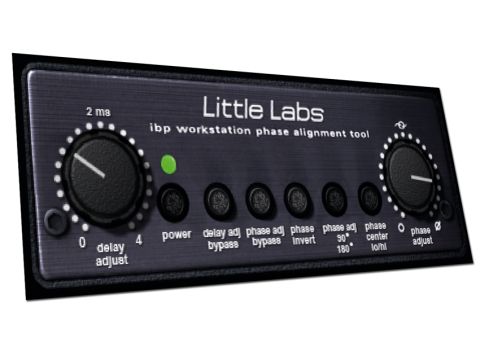 Turns phasing headaches into a thing of the past. A vital tool for any UAD engineers.

When working with bands, guitarists or even solo vocalists in the studio, the most interesting things happen when those in creative control aren't consumed by the technical logistics of a session.

If an artist and producer are able to concentrate solely on performance and the way in which newly recorded parts enhance the work in progress, everyone's happy.

It was traditionally the engineer's job to keep the technical aspects of a track 'in sync' with this creative drive, and among the engineer's tasks was to ensure that alignment of the phase of recorded signals was always spot on.

The moment two microphones are used to capture a source sound, phase issues rear their potentially ugly heads, with the result often appearing as a comb-filtered, hollow, empty sound.

Phase correction tools have been around for years as 'fix it solutions' for problems such as this, and Little Labs' IBP (In Between Phase) unit is among the most popular of these. Hardware now becomes software for lucky UAD card owners.

The control set for the IBP plug-in is, for the most part, self-explanatory. The interface features two dials to the left and right which offer, Delay Adjustment and Phase Adjustment respectively.

Delay Adjustment simply adds a physical delay of up to 4ms to any signal you run through it and it's frequently the case that this dial does enough in its own right to correct phasing issues, simply by off-setting the signal causing the problems.

At the other end, the Phase Adjustment tool does exactly what it says on the tin but rather than simply flipping the phase, the amount of phase adjustment can be dialled in carefully.

A button at the bottom of the interface enables you to specify either 90 or 180 degrees as the 'maximum' amount of adjustment and once you've chosen, the dial lets you move between zero phase and maximum. If, however, it's a total phase inversion you're after, the dedicated Phase Invert button will do the job nicely.

Elsewhere, there's a handy Delay Adjustment bypass button so that you can easily compare the amount of delay you've dialled in with its unadjusted original and an equivalent button for the Phase Adjust dial. Lastly, the Phase Centre lo/hi button shifts the frequency emphasis between low- and high-frequency program material.

No amount of EQ will save files that 'phase clash', so you're either forced to start adjusting note positions by individual frames, or to think about phase inverting files. Plug-ins like this take the venom out of these situations and this one works so well that you can even be a bit blasé about how you record in the first place.

Knowing that IBP is available is hugely reassuring and lets you get on with the important stuff: being creative.

Hear how IBP can help you

We've started here with two identical kick drums set up on channels 1 and 2. In the next clip, we've engaged IBP on track 2 and in the third, we've automated the Delay Adjust dial, so that the second kick is moved from 0mS to 4mS late over a 4-bar duration. You can hear how the kicks change as their phase is shifted.

Here the same acoustic guitar loop is placed on two tracks. The first time you can hear these unprocessed, the second time IBP kicks in with its default settings and in the third, you can hear the effects of dialling in up to 180 degrees of phase adjustment over two bars and the effect returning to zero phase adjust over the following two.

Here, we've made a synth sound in Logic's ES1, panned it hard left and sent it to an auxiliary, panned hard right. We've matched their volumes, then placed IBP over the aux channel. First time this is bypassed, second time it has been phase adjusted 180 degrees and third time, you can hear the phase adjustment, plus moving delay adjustments; 0 to 4mS over two bars, then back to 0mS over the following two bars.