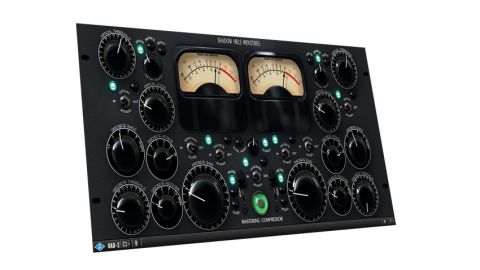 Peter Reardon, the founder of Shadow Hills industries, is happy to admit that he set out to build a processor 'for himself' when he embarked on the design process which eventually yielded the Shadow Hills Mastering Compressor and, now, it's UAD-2 plugin version.

Far from remaining a private dynamics unit, however, word spread and, in pro audio circles, his design became popular enough to be used on mixes for highly successful artists. Tracks by Muse, Coldplay, Gnarls Barkley, John Mayer and Regina Spektor have all passed through its rather unusual processors.

However, costing the same amount as a modest family car meant that the Shadow Hills compressor's reach was always going to be limited to high-end studios. Enter UAD and Brainworx, who have come together to produce a software version.

Built to be different

The key to the compressor's more unique qualities are immediately apparent when you consider how it has been built. There are two available compressor stages with the first, more gentle one, coming in the form of an 'Optical' processor, providing basic Threshold and Gain controls.

This is followed by the potentially more aggressive VCA compressor, labelled 'Discrete' on the panelling, which provides more comprehensive Ratio, Attack and Recover dials alongside it own Threshold and Gain controls.

Either or both (or neither!) compressors can be switched in at any time, giving you huge flexibility over how your signal will be processed - either with the twin compressors working in series or independently.

But that's not all. The final and truly unique design point is represented by the output transformer stage, where the three physical transformers built into the original hardware are modelled.

These provide Nickel, Iron and Steel modes, which progressively 'colour' the sound from clean, through warm to more distorted and edgy, offering three tonal moods to suit your track. You can even use these having bypassed both compressor stages.

The results of such flexibility are, as you might expect, an impressive range of sonic flavours. While the processor's name might suggest that it's only good for mastering applications, nothing could be further from the truth.

As it can work in stereo or dual mono modes, it can serve as a useful processor on 'stereo' sources with independent requirements for the left and right-hand sides. And, because, the plug-in also offers a mono mode, it's an excellent processor for single instruments including vocals upon which, as well as the two parallel dynamics processors, you can turn to the output transformers to provide sonic coloration - great for mixing vocals where a chorus needs a little more drive than a verse, for instance.

Back in stereo land, if you want a hard-edged drum bus compressor to spank the ambience back into a recorded kit, you're in the right place, with fantastic control over transients during the 'Discrete' VCA stage, in particular.

Lastly, as a mastering compressor, it excels, capturing peaks in a transparent way while providing plenty of opportunity to dial in natural-sounding make-up gain.

Love in the shadows

By plug-in standards, $299 isn't exactly cheap but, when you consider that the hardware version of this compressor changes hands for around £6,000, it's an unbelievable bargain, especially when you consider that UAD, in partnership with Brainworx, have achieved a typically brilliant and tonally impressive transformation from hardware to software.

The result is a hugely flexible, sonically-diverse dynamics controller which can provide anything from a subtle sonic tickle to the proverbial punch in the privates. Whether employed for vocals, drums or on the master fader, its unique control and character makes it a joy to use.