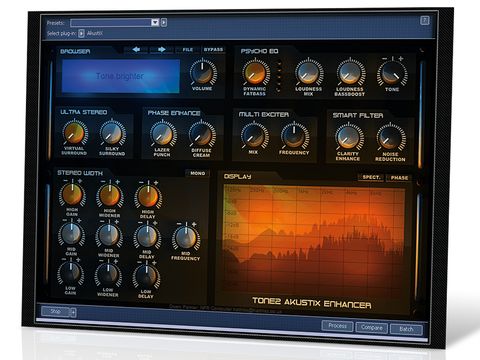 It's not so hot for mastering, but AkustiX Enhancer can bring some unusual, unique enhancements to the mix.

AkustiX Enhancer is a VST/AU plug-in comprising a chain of six processes: Psycho EQ, Ultra Stereo, Phase Enhance, Multi Exciter, Smart Filter and Stereo Width. All are designed to push past the limitations of conventional mixing tools and give your material something a little extra special.

By the time you're done with tweaking it, Tone2 promises that your audio will sound louder, wider, fuller, punchier, brighter and clearer. It also says that it works just as well on individual tracks as it does full mixes.

These are bold claims that Tone2 attributes to the result of cutting-edge research in the field of psychoacoustics; essentially, the study of how we perceive sound.

Our initial experience with AkustiX Enhancer wasn't the most positive, perhaps partly because we didn't know exactly what to expect from it. We ran entire mixes through the presets and weren't impressed with the results: too often, the tone of the mixes was drastically changed and/or the stereo width became wide to the point of sounding watery.

We then patiently put each of the six effect modules through its paces and found that all are capable of producing nasty side-effects if pushed too far. The Psycho EQ can get muddy; the Ultra Stereo fails when tested for mono-compatibility; the Phase Enhance can produce 'squeaking' or transient smearing; the Multi Exciter and Smart Filters can both sound harsh, noisy and lo-fi; and the Stereo Width Control can have a disastrous effect on mono material.

However, when we applied the modules far more subtly, we began to warm to AkustiX Enhancer for individual tracks. We reckon it offers something unique here, and although it's unlikely to be useful most of the time, there will be occasions where its unconventional approach beats the competition.

You'll get small amounts of enhancement out of it at best, but they can be worthwhile ones.

Certain parameters proved their worth: the Tone control (Psycho EQ) offers an immediate means of sharpening or softening the top end; the Silky Surround knob (Ultra Stereo) could work on material that doesn't need to sound consistent during mono playback; the Lazer Punch dial (Phase Enhance) can give an electronic kick drum more presence; the Noise Reduction control (Smart Filter) can provide quirky new textures; and with some patience, the Stereo Width controls can help to breathe life into vintage samples.

Unfortunately, the extended time that it takes to save projects with AkustiX Enhancer loaded makes it impractical for mixing at the moment. We assume this is a bug waiting to be busted, and Tone2 says it's investigating this issue.

We understand that AkustiX Enhancer was initially proposed as a mastering plug-in, but because it lacks EQ, dynamics, limiting and so on, we reckon that's the wrong category for it. That alone doesn't rule out its potential usefulness, but the master output should be treated with absolute care, and we wouldn't recommend you put just any old plug-in on there.

Since AkustiX Enhancer was originally intended to go on the main output, it makes sense that it should have phase and spectrum analysis features. To be honest, though, we didn't find these to be of much use. Although their response times are fairly quick, both visual display modes are quite ugly and lack sufficient detail to be of any serious help. We compared them against a selection of alternative analysers and they didn't stand up particularly well.

If AkustiX Enhancer was to be used for mastering, it would have benefited more from accurate peak and RMS metering, as well as options such as dithering, oversampling and a limiter. As it stands, though, it's easy to inadvertently increase the peak level of your signal when you're using it, and there aren't any kind of automatic gain mechanisms in place. However, there is a volume knob for manually adjusting the level, thank goodness.

With all this in mind, AkustiX Enhancer is way too brutal for use during mastering, and indeed Tone2 has stated that many users have found it more useful as a general mixing plug-in. This is almost certainly where its future lies.