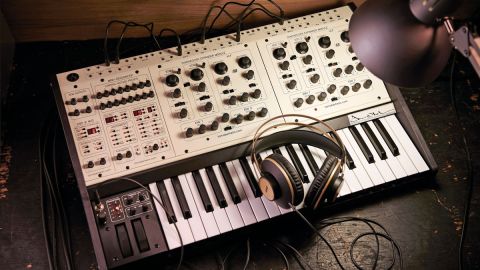 The sonics are immense and authentic, there's a lot of power and flexibility, and the interfacing is comprehensive.

The OB-6 polysynth collaboration with Dave Smith may be the most heavily promoted Oberheim product in recent years but Tom Oberheim has been working hard under his own company Marion Systems for many years, keeping his classic SEM-based products alive and faithful to the original designs.

The SEM (Synthesiser Expander Module) is the classic Oberheim 2-VCO monosynth design upon which many of Tom's most-loved products are based; take for example the Oberheim 4 and 8-voice machines which pack four or eight SEMs into a single case with a keyboard. These beasts fetch crazy money these days and rightly so as they sound immense!

One of the reasons the new OB-6 is proving so popular is due to its SEM-based oscillators and filter and, while it certainly sounds like a more modern take on the SEM sound, it has the inherent character that makes folks go, "Ooh! That's an Oberheim!"

With the analogue resurgence in full effect and many faithful reissues of classics, it's great to see Tom Oberheim striking back, firstly with his new SEM, secondly with Son of 4 Voice (though it hasn't made production yet), and now this beautiful synth - the evolution of the original TVS-1 (Two Voice Synthesizer), the TVS-Pro (Two Voice Synthesiser Pro) which Tom first showed off in 2012. \

We have to say we've dreamt about getting our hands on this synth for a long while. It looks the business and the design, while adding lots of new features, is still classic Oberheim (cream-coloured metal panels, similar knobs and panel labelling to the original TVS-1). Generally everything feels solid, though all the dials have a little 'play' in them.

The case which holds the modules (the sequencer/keyboard control module, two SEMs and left-hand controller panel, aka the Bendbox) feels solid, with a black metal chassis and it's finished off nicely with some black- stained wooden panels (though you can order it with a black front panel, white labelling and brown wooden end cheeks).

While it has its own internal switching/universal power supply, the synth is remarkably light and pretty compact, though you'll need to get a flightcase for it as, unlike the original, it's not built into its own tolex-covered wooden case.

The three-octave keyboard has velocity and aftertouch. Simply set the filters/VCOs to EXT and turn the velocity/aftertouch dials to affect filter cutoff/velocity via the keyboard, or use the included patch leads to send velocity or aftertouch to other destinations via the patch panel.

The Fatar keybed (with added weights under the keys) feels high quality, fast to play and well-balanced and there are seven velocity curves available (selecting curve 0 gives a fixed velocity response).

To the left of the keyboard, you'll find the first significant change from the original TVS-1: the Bendbox. This left-hand controller panel features a great- feeling chunky/rubberised mod wheel and pitch wheel (with range setting) and the mod wheel can also be sent to other destinations via its breakout patch point on the patch panel.

There's also octave switching for SEM A, SEM B (or both together) and we love that with portamento engaged (on either/both SEMs), the sound glides when you flip octaves, which I miss on many other synths.

Also on the Bendbox, you'll find a dedicated vibrato LFO with amount and frequency dials, controllable via the mod wheel or aftertouch (having a dedicated vibrato LFO nicely frees up the two further SEM LFOs for other duties). There's also a fine-tune control for globally tuning the pitch of the two SEMs/four VCOs, plus a VCO2 detuning dial that detunes both SEMs VCO2s simultaneously, though you can detune them individually too.

One problem we encountered was we kept knocking the fine-tune dial when using the mod wheel and it could really do with being stiffer.

Finally in this section, there's a stereo headphone output with level control - it has plenty of gain and it's handy to have it at the front of a synth for a change!

Above the Bendbox is the Keyboard Control section which is surprisingly versatile, allowing the two SEMs to work in several ways, independently or together. You can have the keyboard controlling both SEMs (unison) and with 're-trigger' selected, the envelopes are triggered on each key press (or when off, legato is engaged).

There's also a 2-voice polyphonic mode where one SEM is assigned to one note in a 2-note chord and one SEM to the other, a Rotate mode where SEM A triggers first and B second (on alternate key presses), an 'SEM A First' mode that allows you to hold down a note on SEM A (while all subsequent notes trigger SEM B) and a Split mode where SEM A plays to the left and SEM B to the right of the user-definable split point, (which is set by holding the Split switch until its LED flashes fast and then hitting any key).

It's really something having a super-fat Obie bass in your left hand and a searing lead in your right; connect a MIDI keyboard and you obviously get much more range too. Impressive stuff!

In terms of the SEMs themselves, the design (and importantly the sonics) remain very faithful to the originals, except for using surface mount (instead of through-hole) components/boards. The tone is huge, in-your-face and ballsy/earthy and it stirs a strong emotional response that only truly great synths can!

Each SEM has two VCOs with a frequency dial and fine-tune control and a single LFO that can be routed to one or both VCOs and/or the VCF (the LFO is hardwired to sine wave, which is a little limiting). The oscillator wave options are limited to saw or variable pulse and each SEM has a modulation dial that affects the amount of modulation from the LFO/ENV/Velocity that is sent to the VCO pitch or PW (ie PWM) or the filter.

You can also sync the VCOs for classic sync sounds. Let's also not forget if you set the EXT dial to #2, you can add in noise and if you flip it to #1 (on SEM A) you get an A=440Hz tuning reference. On SEM B, if you turn the EXT dial to #1, it handily sends the output of SEM A into B, which you can then drone/ gate via the keyboard.

The 12dB/2-pole SEM filter is frankly one of the all-time classics, up there with the Moog ladder LPF. It does fat, warm and sizzly uniquely and can be driven hard by the mixer into lovely creamy breakup/overdrive or, when the resonance is pushed, you get all manner of liquidy and piercing (yet still coherent) sounds.

Like the OB-6, it's noteworthy that the Obie 2-pole filter doesn't self-oscillate so you can push it to highlight certain areas of your sound without losing low-end power (and you can obtain fat and warm, with sizzle on the top simultaneously in a pseudo layered-sounding fashion)! Couple this with the 'state variable' filter design/dial (again like the OB-6) that allows smooth/continuous transition between LPF/Notch/HPF and you can get all sorts of cross- pollinated/thinner/evolving sounds and textures too.

It feels like there's almost an infinite sonic palette here and the SEMs are surprisingly versatile (which is a huge part of their ongoing/unshakeable appeal).

Finally (in terms of the SEMs), you have two envelopes. ENV1 generally goes to the VCA (amp) and ENV2 to the VCF (filter), with the amount of filter modulation set by the VCF modulation dial (bi-polar).

The envelopes are pretty snappy too, allowing punchy basses, bleeps/FX and tight drum sounds to be created easily. However, it's a slight shame that they are ADS (and not ADSR) envelopes - having ADSRs would allow a little more flexibility and nuance when making your sounds.

To conclude, the TVS-Pro is sonically-spectacular. Throw in the patch panel, expanded sequencer, MIDI control capabilities, separate outs/panning and CV/gate compatibility and it is a versatile/ powerful package which simply never sounds bad, though the price/lack of patch memory will likely limit its mass appeal.

Regardless, if you want a brand new Obie 2-Voice with the original's essential mojo (and more besides), this is your synth! Here's hoping for 4 and 8-voice versions!