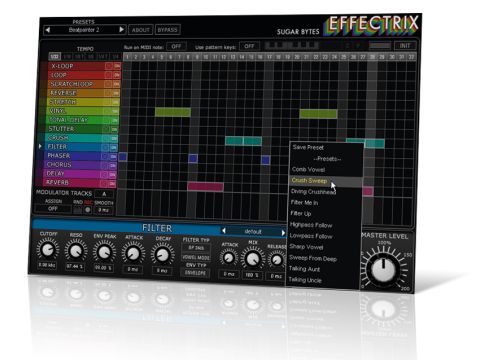 Effectrix offers both inspiration in the studio and an intuitive tool for jamming and live performance. It´s simply addictive!

With launch of the MIDI-savvy Artillery 2 'effects keyboard', Sugar Bytes showed that it had a sense of adventure. With Effectrix, it's taking effects control to the next logical plateau - this is a cross-platform VST and AU multi-effects plug-in with a built-in sequencer.

The idea behind Effectrix seems obvious: pile processes up 14 high and tie them into a grid-based pattern sequencer that enables the different effects to be activated at various steps. Effects can be layered and synchronised to the host's tempo.

Taken on their own, the effects range from run-of-the-mill to way out and wild. There is, as you might expect, a reverb, along with delay, chorus and phaser effects. A multiband filter is in tow, accompanied by a 'tonal' delay for pitched echoes.

A trio of excellent looping effects is included too, among them a superb scratch looper. Stuttering is supported, and you get a vinyl simulator as well. Further lo-fi treatment is provided by the bit-crusher, and there's a cool reverse effect here, too.

Each effect sports a smattering of parameters to play with, along with a selection of presets. Better still, a handful of parameters for each process can be assigned the nifty Modulator Tracks (more on these shortly).

Effectrix is, to our way of thinking, best when used live. Real-time processing with it is a blast. You can create multiple patterns and assign them to different keys on your MIDI keyboard for interactive pattern changes. Additionally, playback of the sequencer can be triggered by a MIDI note-on message. Oh, and there's a MIDI learn function, too.

Our favourite feature might be the Modulator Tracks. Each effect gets four of these, and they can be assigned to parameters specific to that effect. Modulation is drawn into the track per step, and a Smoothing option rounds off any abrupt changes. You can also avail yourself of the Random button, which can be clicked to conjure up freeform patterns in the Modulator Tracks.

Even pedestrian passages can spawn a legion of interesting new rhythms with very little effort when Effectrix is applied. If you don't want to put the work in, you can draw upon the wealth of factory presets. They run the gamut from single-processor sweetening to complex, multilayered freak-outs.

Effectrix is an inspiring plug-in, and ideal for those making glitch, IDM or any form of music with an experimental edge. It's downright addictive, in fact - once you fire it up, it's hard to wrench yourself from it, and when you do, you'll probably come away with a head full of new ideas.

The only thing that might spoil a good time is that the effects are always processed in series, from top to bottom, and while a full-on routing matrix is a pretty big ask, it would be good if there was a way to alter this routing somehow, if even just to change the order in which the modules are arranged.

Take a listen to Effectrix in action: