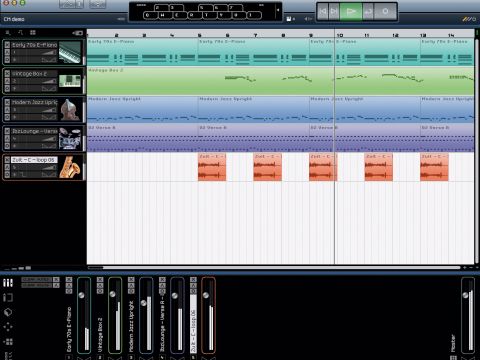 A well-judged update in many ways, but Sequel 2 remains frustratingly limited by its bewildering lack of plug-in support.

Sequel 2 is the, err, sequel to the first version of Steinberg's beginner-friendly DAW and, true to form, comes with several new features. Most of these have been added with the intention of giving the DAW more power and flexibility.

Before we get into the new stuff, it's worth pointing out that Sequel 2 is very much an update rather than a rewrite. In fact, if we were in one of our harsher moods, we'd say that it could easily have been released as Sequel 1.5.

A single DVD installation process ends with the Syncrosoft eLicenser opening automatically, enabling you to get Sequel 2 authorised quickly. As before, registering the software gives you access to 500 extra loops, while the same 5000 loops and 600 instrument presets are included as standard.

The similarities to Sequel are also evident when you look at the software's interface. Control options sit at the top of the screen; the arrangement area is in the middle, and the bottom section of the interface is a resizable window that displays the Mixer, Track Inspector, Media Bay, Editor, Arranger and Program Settings panels. You can click between these using the buttons on the left.

It's only when you inspect the interface more thoroughly that Sequel 2's new features start to reveal themselves. Several of these can be found in the so-called Pilot Zone at the top of the screen.

This has actually been streamlined significantly, but one key addition is the Edit Remote Control Assignment button.

Activate this, and Sequel 2's interface is dimmed, but functions that can be assigned to your hardware controller are framed in black. Making these assignments is easy - just click the button or parameter that you want to tweak, then press or adjust the control on your hardware that you wish to tie it to.

This is hardly a revolutionary system, of course, but it's certainly a simple one to use.

The Pilot Zone also includes the new Virtual Keyboard. This enables you to play Sequel 2's instruments without having a hardware equivalent hooked up. The display can be toggled between a piano and a computer keyboard.

This new feature makes recording simple parts on your QWERTY keys easy, so it will appeal to laptop users in particular.

Track Icons are another interface-related addition - you can now assign appropriate pictures (either the included examples or your own) to recorded parts - but more useful is Track Freeze. This option does exactly what you'd expect it to: it's a function that enables you to render your tracks and associated effects to audio, thus freeing up processing power that can be used to expand your project. It's easy to turn on or off - just click the snowflake button on any track's Info panel.

Other new features include manual audio warping - previously, this was only done automatically - an audio reverse effect, which works as expected, a tap tempo feature, and an improved MediaBay that enables you to locate content slightly faster (there's now a text filter, for example). Support for the Windows Vista Core Audio driver is also in place.

If you want to expand your portfolio of sounds, you can do so by investing in one or more of Steinberg's new Sequel Content Sets.

Sequel remains an accessible, relatively powerful application that also proved to be flexible and stable during our tests. We did have a couple of issues with hanging notes and level meters 'dancing' when our project wasn't actually playing, but we'd expect that Steinberg will sort these minor problems out in a subsequent maintenance update.

The elephant in the room, though - and it's a pretty big elephant - remains the lack of plug-in support. It seems strange that, since Steinberg has added so many features that will be of use to the budding producer - hardware controller support, track freeze and audio warping in particular - it's continued to omit something so fundamental.

It's especially strange when you consider that Steinberg arguably brought about the whole plug-in revolution in the first place, by making the VST SDK freely available to anyone who fancied rolling out their own effects and instruments for use in any app supporting the VST standard.

We understand that it doesn't want to cannibalise Cubase sales, but if Sequel is ever going to appeal to anyone other than hobbyists, Steinberg really must address this.

Listen to a tune that was created entirely with Sequel's built-in sounds: