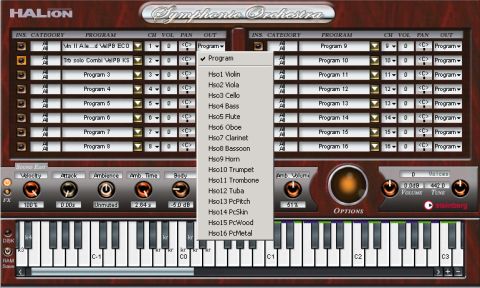 Another fine orchestral collection, despite the lack of a harp. All in all, HALion Symphonic Orchestra is an excellent piece of software.

Steinberg dipped their toes into the orchestral waters with two versions of HALion String Edition, but now we have a much more comprehensive solution to consider.

HALion Symphonic Orchestra (or HSO, as we shall refer to it from now on) ships on no less than four DVDs and includes a massive 27GB of samples.

The full library takes around 45 minutes to install - the good news is that it can be placed on any drive, as long as you tell HSO where to look for it. To use the software you'll need a Steinberg/Syncrosoft key, though it should be pointed out that you don't get one in the box.

If you're short of disk space or RAM, you can use the 16-bit version of HSO, which mirrors the full-on, 24-bit version.

The library is stored in the form of banks of related instrument families (.hsb files). These can be opened up in HSO so that you can then load individual programs into instrument slots.

There are more than 150 banks on offer, so it's good that you can focus your browsing by narrowing down the categories in the appropriately named Category pane. If you select Brass, then Trumpet, for example, you're left with only four banks, though each one does contain more than 20 variations.

As you may be aware, creating authentic orchestral parts on a MIDI keyboard can be rather difficult. String, woodwind and brass instruments all use either bow or air pressure to control the envelope and timbre of a note (players also make subtle finger and lip movements), but MIDI keyboards only offer velocity-sensitive keys, and perhaps aftertouch.

This being the case, HSO features up to four different versions of each patch, and each of these is controlled in a different way. If you load an Xfade patch, you can use a continuous controller (like your modulation wheel) to fade between up to four stereo layers.

Needless to say, these patches place the most demands on system resources, and they're also the most expressive. Xswitch patches are suitable for less powerful systems, as they use layer-switching rather than crossfading, so only one stereo sample is used at a time.

If you use a Velocity patch, meanwhile, the velocity level is used to determine which layer is used. Velocity Plus Pitchbend patches are similar, though with these, the pitchbend is used to control volume and therefore isn't available for pitch manipulation. The thinking here is that the pitchbend control is self-centering, so can be easily used for performing diminuendos as well as crescendos.

You can't fail to be impressed when you first hear what HSO can do. Its samples were clearly meticulously recorded, and we found no fault with any of the patches (16- or 24-bit) when we started playing around with them. The only major omission is a harp - an instrument that's surely as relevant to any orchestra as some of the percussion that HSO includes.

This oversight aside, it's clear that Steinberg have put a considerable amount of thought into creating an orchestral package that doesn't place too many demands on its users. As with all orchestral, string and horn plug-ins, though, you do need to have some understanding of the instruments that HSO emulates - their strengths and their limitations - if you want to manipulate their virtual counterparts in a realistic and convincing manner.

There are a couple of niggles with HSO. The instrument menu system could benefit from a little bit of attention - it actually includes categories that aren't featured in HSO, such as 'Synth lead', which just seems sloppy.

Also, if you want to audition all of the 16-bit violin patches that use cross-switching, for example (there are 43 of them!), you can narrow things down by selecting Strings/Violins in the Category panel, but you still have to scroll down 54 folders to locate the next patch you want to hear. A system that recalled where you last were and had an 'up' button would be more practical in many cases.

What's more - and though it might seem strange to say - it sometimes feels like you have too much choice. It would take days to try all of the HSO patches out, and to tell the truth, some of them sound very similar anyway.

Ultimately, however, HSO is a worthy, high-performance application and should certainly be considered if you're serious about your orchestrating, though we'd still like to see that harp added in a future update.

It sounds great, and the inclusion of the HALion RAMSave technology and Eco mode means that you can configure HSO according to the power of your computer. Just remember that you'll have to spend some time learning how to use it: HSO's interface may be simple enough (its menu system nonwithstanding), but it won't sound like a real orchestra unless you make it do so.