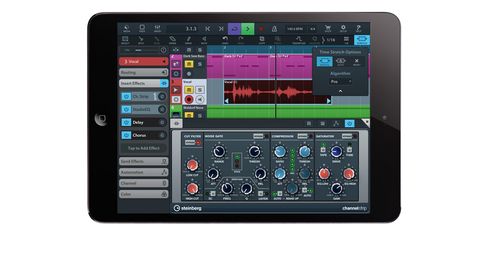 Version 2 really does feel like a miniaturised copy of Cubasis' desktop cousin. A must for iPad musicians, doubly so for Cubase users.

It's been over three years since we last looked at Steinberg's iPad DAW, and in that time, not only has Apple's tablet become considerably better equipped in the processing and memory departments, but Cubasis' main competition, Auria, has seen the long-awaited addition of MIDI functionality, putting it at the head of the mobile music-making pack.

With Cubasis 2 - a free upgrade for owners of Cubasis - Steinberg has overhauled its portable virtual studio in several key areas. Before we get into the new stuff, though, let's take a quick tour of the app in general.

Cubasis is a scaled-down version of Steinberg's full-fat Cubase Mac/PC DAW, designed for touchscreen operation and offering as many simultaneous audio and  MIDI tracks as your iPad can handle.

Three virtual instruments are included - the superb Micrologue 'analogue' synth (based on the desktop Retrologue), the Micro Sonic ROMpler (based on HALion Sonic) and MiniSampler (a very simple sampler). MIDI and audio are recorded or imported into a conventional arrange page, which is navigated and zoomed by dragging and pinching. A fully automatable mixer is built in, along with a decent roster of insert and send effects (greatly expandable via a couple of £3 DLP packs), all of which can be automated.

Comprehensive manipulation of audio and MIDI clips is done in a resizable editor, and mixes can be exported in WAV, M4A, FLAC and MIDI formats. Oh, and as you'd expect, Cubasis projects can be imported into Cubase.

A ton of new features have been introduced with the numerous point updates to v1 since our review, including all the aforementioned instruments, track freeze, support for multichannel audio interfaces and external hard drives, a dedicated channel EQ, compatibility with Audio Units plugins (more on these below!), and all manner of tweaks to the interface. Cubasis 2 feels like another incremental continuation on the same trajectory, adding yet more useful new goodies to its ever-expanding arsenal.

One particularly important addition made just prior to Cubasis 2 was support for Audio Units instruments and effects. Audio Units in iOS work just like their Mac equivalents, operating as 'plugins' within the architecture of the host environment for a far more enjoyable and seamless experience than you get with Inter App Audio or AudioBus - as great as both of those are. They're developed as extensions of regular apps, rather than on their own - ie, apps are made AU-compatible, not developed solely as AUs.

All your installed Audio Units appear in Cubasis' Effects and Instrument menus, alongside your IAA-compatible devices. Tapping one calls it up directly within Cubasis itself, where it appears in a fixed-size (about half the screen) area at the bottom (pushed up by the keyboard), delivering all the controls and capabilities of its full app equivalent, integrating perfectly with the sequencer (in the case of instruments) and mixer, and being generally great.

The only snag is that, for whatever reason, the AU protocol hasn't really caught on with iOS developers in as big a way as we'd hoped it would when it was first announced a couple of years ago. Whether it's the hassle of converting the full-screen GUIs of iPad apps to half-screen alternatives, or just lack of interest, the fact that porting an app to AU clearly isn't as simple as flicking an 'AU-compatible' switch in Xcode has proved a hinderance. Those who have made the effort, though, include Arturia, PPG and Klevgränd - kudos to them.

For many producers, the biggest news with Cubasis 2 will be the introduction of real-time timestretching and offline pitchshifting, using zplane's ubiquitous elastique 3 technology.

With one or more audio clips selected, tapping the new Stretch button reveals a choice of Manual and Auto options, and three algorithms - Mobile, Efficient and Pro - for balancing CPU overhead against sound quality. Tapping Auto instantly stretches the selected clip(s) to match the project tempo; although the fact that this only works with tempo-embedded loops rather limits its usefulness. Most of the time, then, you'll be reaching for Manual mode instead, which lets you simply drag the ends of a clip to stretch it up to 999% of its original length or compress it down to 10%.

Helpfully, timestretched clips are labelled in the Arrange window with an 'A' for Auto or the percentage of stretch applied for Manual, and undoing a stretch is a simple matter of tapping the Reset button. All in all, it's a simple, beautifully implemented system that delivers excellent results.

The new audio pitchshifting system-accessed by tapping the Transpose button with one or more audio clips selected - isn't as viscerally thrilling as the timestretching setup, due to its non-real-time application.

In Mobile and Efficient modes, you can repitch the source material up to two octaves either way in Octaves, Semitones and Cents, while Pro mode adds in Formant Shift and Formant Order sliders, for keeping vocals to their original gender or creating weird effects.

Workflow-wise, Cubasis' pitchshifting feels like a throwback to a bygone era in digital audio: set the sliders based on knowledge of the target pitch or guesswork, then hit the Apply button. There's no preview or auditioning, although thankfully the control window doesn't disappear on Apply, so you can tweak your way to the desired pitch without having to call it up repeatedly. Again, with elastique 3 under the hood, the results are great.

Strip to the bone

Timestretching and pitchshifting are the main workflow-enhancing additions to Cubasis 2, but the new Channel Strip is the one that's going to make the biggest difference to the overall quality of your iPad-based productions.

Integrated into every mixer channel as a partner to the four-band StudioEQ (the two can be arranged in either order), this tidy-looking console-style suite comprises four signal shaping processors ported over from Cubase, each with its own bypass switch.

First in the chain is Cut Filter, for dialling in a low-pass filter from 50Hz-2kHz and a high-pass filter from 20Hz-2kHz. Next comes the Noise Gate, which goes beyond the one already included in the main effects list with the addition of a sidechain filter for frequency-conscious gating.

Then there's the Compressor, which works at maximum ratio of 8:1, and features Auto Release and Make Up Gain. Finally, the Saturator is switchable between Tape and Tube modelling (the latter the crunchier and less dynamic of the two) and sports high and low shelving EQ.

Although all the processes available in Channel Strip were already accessible through Cubasis' main plugins, the convenience of having this quartet of mixing essentials in one place is undeniable - plus, the Compressor and Saturation sections sound better than their regular counterparts.

Standing out like a bit of a sore thumb among Cubasis 2's otherwise fairly traditional line-up of signal processing modules, the new Spin FX effect appears to be built with live performance - not something we've ever heard of anyone actually doing with Cubasis - in mind.

The top half of Spin FX is an X/Y filter pad, with cutoff on X, resonance on Y and a choice of high-pass, band-pass and low-pass modes. Below that, the colour-coded trigger buttons fire off a range of cycling rhythmic effects when held down, with their timing relative to the project tempo determined by the Time Grid buttons on the left.

The red buttons trigger seven 'DJ' effects, including scratching, backspin and stop/start, while the adjacent green buttons cover stutter repeating (fractions) and stretching (2 and 4), and the three blue triggers loop the incoming audio. The left-most yellow button 'trancegates' the signal according to the Time Grid setting, and the right-most kills it entirely until released.

Although ostensibly a DJ-orientated effect, Spin FX does have some 'studio' relevance in that it's automatable, which makes it handy for filter sweeps, drops and other arrangement situations where a touch of live effects manipulation can be just thing for upping the energy. It's also just plain fun to mess around with.

The best of the rest

With the marquee new features covered, let's quickly wrap up the less headline-grabbing stragglers. Auto quantise snaps incoming MIDI notes to the grid as you record, but with the option of unquantising back to the captured timing immediately after the event should you wish.

And a fair chunk of new sound content has been thrown in in the shape of 75 new Micrologue patches and a set of Mellotron-inspired 'Tape' presets for Micro Sonic. The bundled drum loops have been upgraded to the lossless FLAC format, too. As we've suggested, relative to Cubasis 1.9.8,

Cubasis 2 is very much an evolutionary step, not a revolution of any kind - but that's testament to the extremely generous v1 point releases that have arrived steadily over the last three years, rather than any sort of underachievement on the part of this latest version.

A touch of class

Ultimately, whether you view it as a discrete punctuation point in a series or just the latest stage in a continuum, Cubasis 2 is a triumph of software design.

The interface is a pleasure to use on any size iPad, the DAW fundamentals of arrangement, editing and automation all being precisely tuned for touchscreen; and there's no reason at all why you can't get serious production work done with it.

We're not at all fussed about the included loops (in fact, we'd cheerfully delete them to get some storage back if we could), but Micrologue is wonderful, as are Channel Strip, StudioEQ and the DLP effects (go on - you might as well).

The paucity of quality Audio Units is frustrating, of course, but that's hardly Steinberg's fault, and at least there's IAA and AudioBus to pick up the shortfall.

Cubasis 2 may not be quite as powerful as Auria Pro, but it's friendlier, easier to get into, more fun, and capable of delivering everything the majority of producers will likely ever need in a mobile music solution.

Whether you're a Cubase user or not, if you own an iPad, Cubasis is worth every penny of its - in App Store terms - 'premium' pricetag. No longer just a capable on-the-go drawing board, it's now a powerful DAW in every meaningful sense.