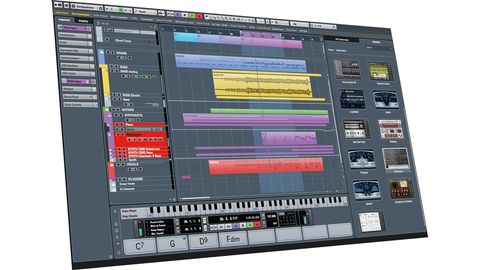 The 8.5 update comes highly recommended, and offers enough to warrant its price of entry.

This time last year we mentioned that Steinberg seems to be settling into an annual rhythm as far as major or half-step updates were concerned.

Not wishing to disappoint us, those in charge of Cubase development have once again delivered a new year treat.

The arrival of Cubase 8 Pro brought with it an attempt to tidy up some of the legacy issues associated with window handling - which with the arrival of Windows 10 do make more sense.

Despite this, C8 introduced some significant new features, with the most important perhaps being Render In-place, though VCA Faders, Direct Outputs and a new Plug-in Manager were also most welcome.

The most noticeable thing is that it all looks visually similar. As far as Steinberg is concerned, the headline new features in Cubase Pro 8.5 are VST Transit, a cloud collaboration service, and the updated analogue-style, subtractive synth, Retrologue 2. Alongside these though, there are plenty of other tweaks and additions.

The Chord Pad functionality has been updated but there are some notable enhancements in other areas of MIDI and note entry. The Drum Editor now has a note length mode, and visibility agents make it easy to see only those lanes with content.

All MIDI editors now have an extended range of event editing shortcut keys, allowing you to create and alter length, velocity, position and pitch in one.

In terms of track handling, there are a few tweaks that make Audio and Group track creation a little more immediate in terms of routing choices and their position in the project page. The big news here though is Import Tracks From Project, which allows you to grab track content (on a range of track types) from a previous project without having to open it.

You can create new tracks or replace existing ones (with Track Versions automatically enabled). The only thing missing for me was that only the MIDI could be imported when MIDI tracks were routed to Rack Instruments - not the instrument tracks as well. Shame.

A very useful change in C8.5 is the way in which punch-in and punch-out recording works. Previously this was linked to the left and right locator positions, which was somewhat inflexible and lead to unnecessary button pressing or mouse clicking.

Finally the two are separate, with the ability to drag punch points independently in the toolbar - and you can now use punch-in/out in cycle mode - neat.

With a nod to this more refined approach, the Transport Bar, Project Ruler and Mixdown window have also been tidied and refined, and Tempo Track scaling when moving tempo changes is a lot more fluid.

Cloudy with a chance of collaboration...

Steinberg has been exploring different collaborative systems over the last few years. VST Connect (which in its SE guise is still bundled with Cubase) is a remote recording solution aimed at real-time peer-to-peer collaboration.

VST Transit is a somewhat different beast in that it integrates more fully with the DAW, and is aimed at collaboration on a Project level. As such, it embraces a non real-time cloud-based approach.

Collaborators are each required to create a login on MySteinberg and then a VST Cloud profile. This profile can be public or private, and includes information about skills, genres, instruments and a short (30s) audio demo. From here you then create a Project within the VST Transit window (located in the new VST Cloud drop-down menu) that can be sync'd to the cloud.

Only certain parts of a project are sync'd, and it is therefore mainly geared to the adding of new ideas. So although, at the moment at least, it does not allow complete freedom, it is nonetheless a great way of allowing others to add ideas to a track in a more formalised fashion.

By default, Steinberg gives you 500MB storage space and 1GB traffic per month free. Apparently, premium accounts with more traffic and storage will be available from mid-January, though there is no pricing available at the moment.

Retro but more so

In a world inhabited by numerous virtual-analogue synths, one would be forgiven for not paying much attention to Steinberg's Retrologue. However, this would be a mistake.

In its original incarnation we have found Retrologue to be a surprisingly capable synthesizer, and one that makes a real virtue of its relative simplicity. Its one-window approach means that creating and tweaking sounds is very quick, but it also sounds good.

Each of its oscillators has a range of interesting shaping options, its filters do a good job, and it can create authentic analogue-style sounds and textures - to the extent that we have used it far more than we will admit to anybody.

Retrologue 2 is not a radical overhaul - you still get the black, grey and blue interface - but it expands its capabilities in a few significant areas.

The two main oscillators have been joined by a third with a similar feature set, with the existing sub-oscillator, noise source and (slightly expanded) ring-modulator capabilities still in place.

Sync and cross-mod have been joined by XOR (great for retro computer game stylings), and each oscillator has a range of waveform trigger and phase modes, including a 'free-run' option for a more authentic analogue vibe. The filter section's 12 filter types are now doubled to 24 and there are some additional digital distortion modes.

Effects were always basic in Retrologue. This time we get an expanded choice with free routing via a dedicated window. The Resonator and algorithmic reverb are both good to see, and there's now a sense that Retrologue patches are far more self-contained, requiring less outside processing.

Modulation is greatly enhanced with two additional LFOs and a multipurpose bipolar envelope, but the really big news is the 32-step arpeggiator.

In fact it is so big, it needs its own window. This is not your simple up-down pitch arpeggiator, but one that adds four lanes of parameter control as well. It makes creating step-sequencer style pulsing patterns very easy, with the added benefit that you can export a pattern as MIDI information by dragging it into your Project page. Overall the new arpeggiator is both fun and useful.

The modulation features in Retrologue have also been bolstered with extra slots in the Modulation matrix and, more significantly, the ability to drag and drop mod sources to their intended destination.

With so many potentially different types of user, it is always going to be hard to please everyone, and this update is no exception. If you mainly record live audio and collaborate in person, then it's likely that only the workflow and editing enhancements will hold any appeal - though there are quite a few here, and the import track feature is a potential winner.

VST Transit is a very interesting idea, though it does, of course, require all collaborators to be using the same DAW version and plug-ins. Collaborative writing yes - but maybe not group- based mixing just yet.

The fact remains that all major DAWs are very close in terms of features - and seem to look ever more similar. For existing users there may be enough to tempt you to part with the £36 upgrade fee, and for new users Cubase still has a lot to offer.