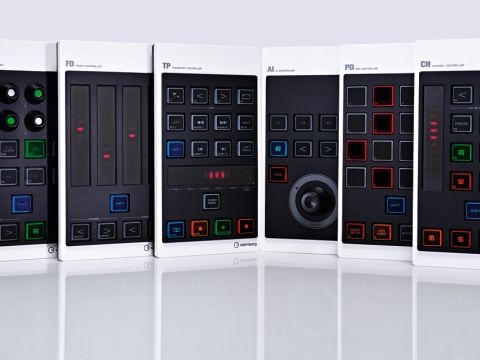 Interesting controllers, but only time will tell if they can wrestle users away from their mice.

The fruits of Yamaha's ownership of Steinberg continue to bear fruit in the hardware realm with the arrival of the CMC range of controllers. These are aimed fairly and squarely, though not exclusively, at Cubase users.

The range consists of six similarly-sized USB-powered devices that each take care of a different set of mixing, production and control functions. Although the controls on each device vary according the task to which it is assigned - and it is worth noting that they are not all priced at the same point - we find switches, rotary encoders and touch faders, all with varying degrees of illumination and visual feedback.

The units can be used on their own or as part of a larger, multiple controller setup. However, the drivers for the devices, quite logically, allow for only one instance of each, with the exception of the MCC-FD Fader Controller where four concurrent units (16 channels) are supported.

It is worth pointing out here that a USB hub is recommended when running more than a few controllers simultaneously, as there is no way of linking units together internally - each has only one USB socket by way of connection. Steinberg can also provide (for a price) a couple of extension frames for bundling units together in something more solid that the plastic clips that come with each unit.

Software installation is straightforward and, as well as installing the relevant drivers, adds the units to the Cubase Remote Devices menu, where a degree of customisation of functions is facilitated.

Incidentally, Cubase AI6 (a trimmed-down version of the full DAW) is included with each controller.

The CMC-CH Channel Controller provides a good overview of what the range offers. Taking the Cubase Audio Channel strip as is its cue, the CH features one of Steinberg's new Touch Controllers for the fader.

This can be configured to jump to new values instantly or only move once the existing fader position is passed (represented by an LED beneath the fader strip). There is also a continuos rotary encoder assigned to Pan (this time with LED brightness indicating the value's extremities).

The rest of the unit is populated with buttons mapped directly to those in the software (such as various bypass switches, automation Read/Write and Mute/Solo) as well as Folder and Freeze buttons. The SHIFT button also provides access to each button's secondary role as a Function key for triggering Cubase Key Commands (which can be fully customised within the DAW itself).

The CMC-FD Fader Controller provides four of the aforementioned Touch Faders for levelling duties - they can also display channel level meters (though only in red) if required.

CMC-TP Transport Controller is dedicated to transport functions including locators, markers, jog, shuttle and zoom, as well as the obvious loop, play and record buttons.

The CMC-QC Quick Controller uses eight rotary encoders to access the built-in EQ, but their role can be switched to adjust the values of each Cubase channel's Quick Controls or those of the currently selected plug-in. The QC can also transmit standard MIDI CC data, which is fully configurable via the include CMC-QC Editor software.

The CMC-AI features Steinberg's now ubiquitous AI knob, which facilitates adjustment for any parameter beneath the mouse pointer, though fine control (à la Shift + mouse) is seemingly not supported. Like the QC, where 'parameter learning' is possible, plug-in control is restricted to Steinberg plug-ins (no third-party control here - shame). The range is rounded-off with CMC-PD Pad Controller - a 4 x 4 drum trigger matrix.

Of all the controllers in the CM range the CMC-PD is the only one that may be of interest to non-Cubase users. What we have here is a 4 x 4 drum pad matrix, somewhat akin to a mini MPC-style controller.

By default each pad is mapped to a different MIDI note, with a rotary encoder for switching between 'banks' of 16 MIDI notes. One of these banks is assigned to GM mapping of drums.

Each of the pads lights in green, orange or red depending on the velocity with which it is hit, although different velocity curve scan be selected to make process more flexible. The so-called '4Velocity' mode is intended to speed-up step-time not entry by assigning different velocities (but the same MIDI note) to four different pads. Adjustment can be made to key assignments using the editor software included with the unit.

Overall this is a useful little controller, which made programming drums a pleasure, though it does feel quite light in the midst of a good bashing!

The truth is, we desperately wanted to love these controllers - they look really good and they promise a lot - but they don't quite deliver on all fronts.

Despite their LED-driven visual feedback, you still need to move your eyes between screen and controller. This is perhaps a criticism of many remote controllers; even Focusrite's well-regarded Automap devices do not fully address this shortcoming.

The reality remains that screen-based touch devices, such as the prolific iPad, might point more realistically to where things are going, though mice will no doubt rule the roost until a unifying standard is arrived at.

In fact, if the cost of the CMC range was lower, making them a more impulsive purchase, the picture might have been different, but they do face competition, albeit from none that integrate so fully into the Cubase workflow.

It may not be love, but we'll certainly be friends with the CMCs.