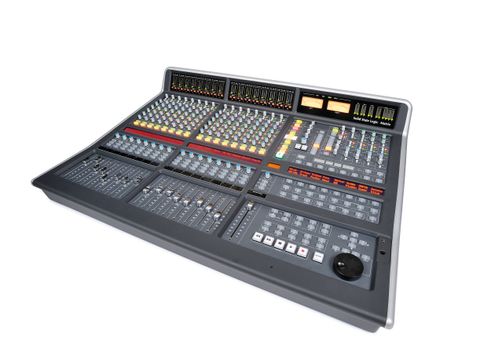 A well-designed console that puts the creator in control. It enables you to save your time and energy for the important stuff.

The Matrix certainly has the look and feel of an SSL desk, but when it arrived at our studio it came in the back of a saloon car and could be carried out under an arm. OK, so we have long arms, but this thing is portable, don't doubt it. And when added to the power of your DAW it makes for a very impressive package.

The Matrix connects to your computer via Ethernet for the MIDI and USB for the key commands and macros. It uses the Mackie HUI protocol so it's very straightforward to set up. The device comes with control profiles for Logic, Nuendo, Pro Tools and Pyramix but you can also build your own.

Software is supplied on a DVD and, once installed, gives you control over various features, project names, Total Recall, the insert matrix and the all important soft key setup.

Audio connections are pretty straightforward, but there is one notable omission from the input list - there are no mic inputs! SSL has figured that most people in the market for a device like this already have a setup which includes various mic pres, EQs and compressors which they use to front-end their DAW.

There are two distinct operating modes to the Matrix. What SSL calls Analogue Focus and DAW Focus. In Analogue Focus the 16 faders, cuts and solos control the analogue channels. In DAW Focus they affect the selected bank of workstation digital channels.

The first pot above the faders is the V-Pot, which in DAW Focus can have many and varied functions (panning, routing assignment, plug-in parameter control etc). Above the master fader is a master channel, and a row of buttons giving you access to various channel strip controls for whichever audio channel or channels are selected.

So let's look at the channel strips. The whole section above the numeric display is analogue only so let's start at the top.

First up is a line trim, which can be fed from either the line input or the DAW return, depending upon which is selected. The line may be fed from a mic pre or some other input source; the DAW inputs are fed from your digital to analogue converters. Just below there's a phase reverse and an insert in/out selector which puts your selected insert into the channel path.

Underneath is the channel output which can be pre fader but post insert, post fader and post line-in. Below that is a stereo send with pan and level controls and two mono FX send pots.

Which brings us to our first minor criticism: there are four FX sends but only two pots. You have to choose between send 1 or 3 for the upper, and 2 or 4 for the lower. In a mix you'd have to plan pretty carefully how you assigned them in order to avoid wanting 1 and 3 or 2 and 4 on the same channel. Two more pots wouldn't have made the channel that much longer and would have given more flexibility.

When tracking, channels can either go straight to your DAW via a direct out or you can mix together or bounce down any combination of the 16 via the record bus. During mixing the line inputs can be set up to feed the stereo cue which can in turn feed the mix bus, giving you the possibility of summing 32 inputs each with independent pan and level control.

There's even a version of supercue monitoring, allowing for direct monitoring of source or DAW output as you drop in and out, thus avoiding any latency issues.

So what is the insert matrix? Well you need to connect your compressors and EQs to those 16 insert points and look at the control software on your computer. Once you have written their names into the devices list you can start to play.

The insert matrix has 16 slots, each with a pull-down list, and just like in the plug-in world you can call them up. You can make up chains of devices at the bottom of the screen which you can store and access in the same way. It's simple, straightforward, very easy to use and there's no messing around with cables.

However, we do have a gripe here too: there are separate inserts for the mix, record and stereo cue busses. That's right, these are hard wired and aren't in the insert matrix.

It would have been nice to have them included in the matrix, but then most people who would be considering buying the Matrix have a favourite bus compressor which they leave strapped across the desk output anyway, so it's hardly a big issue. And because you'll be using the mix bus to analogue sum stuff back into the system, it'll always be there when you need it.

The transport controls and jogwheel work great with Logic. Locating, setting up loops and skips, punch-ins and the like is quick and easy. The wheel itself and the transport buttons feel positive in operation and everything is obvious and intuitive.

Accessing different sets of channels is either by banks (blocks of 16) or you can nudge them one at a time. Automation parameters can be quickly set and adjusted but the real joy comes when you start to explore the possibilities of the many soft keys - just select a channel and hit the track soft key to get involved.

On a send, you can scroll through the buses and on instrument tracks you can assign the instrument (selecting it gives you the instrument parameters). In use, the system straightforward and we found it quicker than using the mouse in most situations.

If you hit the flip button you can use the fader or the V-pot to change parameters and, in many instances, this speeds things up even more.

So long as you set your control surface resolution in Logic to 'fine', you have just as much control over plug-in parameters, and in some cases more, than you would with a mouse. Bringing the faders into play makes multiple parameter control really simple, and gives you a whole new way of working with plug-ins.

But it's not just about the speed of operation, it's about the creative flow. Digital systems can give you so many advantages, but when it comes to manipulating audio, a mouse and keyboard combination is very much the poor relation.

Solid State Logic has always had a reputation for innovative design coupled with high-quality audio and fast, intuitive, user-friendly interfaces. With the Matrix it's opened up a whole new area of audio integration which other manufacturers will undoubtedly move into. The next few years could be very interesting.