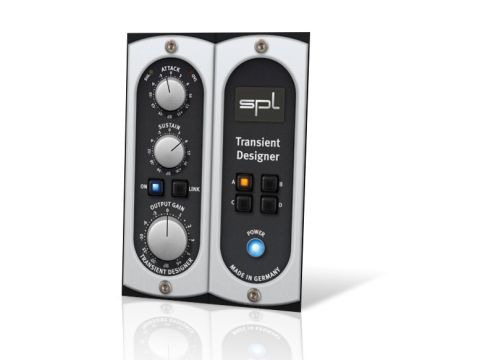 There's no shortage of transient-shaping plug-ins, but this one has a real pedigree behind it and a sound to match.

Users of Universal Audio's UAD DSP system have been able to indulge in an official emulation of SPL's famous Transient Designer for a little while now.

However, now that SPL has moved into native plug-in development with its Analog Code series, it's no surprise to see this entirely self-produced emulation of the company's classic hardware device.

The real question, of course, is how it fares in comparison to the original hardware version. Although it was introduced over 12 years ago now, the SPL Transient Designer was revolutionary in concept: a level-independent dynamic processor that allowed you to adjust the attack and sustain portions of an audio signal. There were just two controls per channel and it took just about as many seconds to work out what it did.

Throw it across a loop and the huge range of its abilities was staggering. Minimum sustain settings would be tight and punchy with any ambience sucked right out; maximum settings would yield pumping and breathing like the rudest compressor, but without the attack inconsistencies. It was a godsend for dance producers everywhere and many others beside.

The software plug-in is visually modelled on the latest hardware version found in SPL's RackPack. There are still just the two controls - Attack and Sustain - plus an output gain pot going from -20 to +6dB. Bypass and Link controls complete the main panel, with the latter offering ganged or independent operation on a stereo track.

Beside the main panel are four 'settings' buttons for storing and recalling different combinations with a click of the mouse. A/B'ing it against the hardware version, it's clear that the essence of the original has been captured in the plug-in. Pull the Sustain back and any reverb on the audio starts to fade away. Turn it up and you get that satisfying pumping with the accompanying bottom-end breathing.

If anything, the shape of the bottom end on pumped loops is more appealing with the plug-in than the hardware. Turn the Attack up and the impact of any blunt performance is enhanced. Turn it down and any hard, spiky parts sink softly into the mix.

There are one or two blots on its copybook, but nothing major. The Attack response, particularly with high frequencies, doesn't seem as controlled as the hardware. In our tests, we could hear the hi-hats spitting in the processed loop under software control, whereas with the hardware, the attack was completely smooth. A lookahead feature might have helped with this.

Also, without an input level control, there's a danger of overloading the plug-in at the input if you're upping the attack on an already high-level signal. You can get round it with a trim plug-in beforehand, but an Input control would make more sense. Oh, and what about a sidechain facility? That could be fun.

The software version has lost none of the excitement that its hardware parent engendered. The sheer variation of attack and sustain characteristics created here is still astonishing, and all from just two knobs. With automation, the musical possibilities from subtly building up and dropping intensities using the Sustain control are particularly exciting.