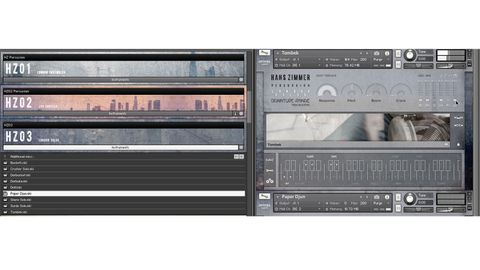 Offering a 'fine brush stroke' approach to what was already a versatile, high quality percussion library.

HZ03 London Solos is the third title in Spitfire Audio's collaboration with Hans Zimmer and provides a pared down approach to the bombastic sound of the HZ01 library, with solo performances of many of the same drums featured in that first library.

Once again the collection has been produced by Zimmer-collaborator Frank Ricotti at London's Air Studios using a set of "rareified mics" and Neve preamps. As with all Spitfire's libraries, these samples have been captured using multiple microphone configurations too, between which you can balance using the dedicated level sliders towards the top of the GUI.

If you want to bring a smaller-sounding, more intimate version of an instrument to the fore, before perhaps bringing in a fuller Ensemble sound behind it, this library is for you.

To make such sonic partnerships straightforward, HZ03 offers the same microphone positions as those found in HZ01 but there are more performance articulations for some instruments, mining the subtleties of instruments which are diluted when performed in larger Ensembles.

Indeed, this detail is explored further with the inclusion of Additional Mics patches, which offer Bottle, Mid-stage, Gallery, Overhead, Stereo Pair and Contact microphone perspectives too, significantly increasing the sonic potential for each instrument.