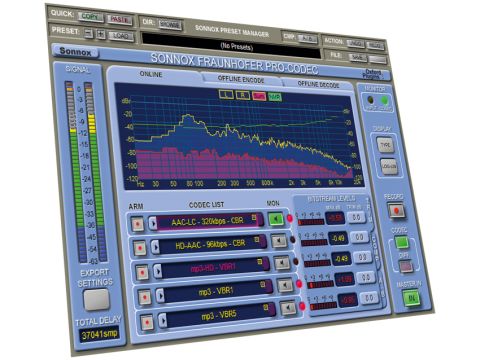 A brilliantly designed plug-in that fulfils its, albeit specialist, brief in practically every way.

The music industry changed forever in 1995, although few realised it at the time. This was the year when the Fraunhofer Society changed the ﬁle extension on their MPEG-1 Audio Layer III encoder to the now ubiquitous MP3.

Lossy codecs (coder/decoders) rely on a quirk of the human auditory system that interprets sounds waves in a series of speciﬁc frequency bands. It means that a quiet tone can be masked (rendered inaudible) by a louder one in the same band.

MP3s and their ilk, attempt to remove those elements determined to be inaudible - the greater the compression, the more information that is removed.

Sonnox is well-known in the ﬁeld of audio DSP, and its Oxford range of mix and mastering plug-ins, while not cheap, are highly regarded. The new Pro-Codec plug-in moves into a relatively unpopulated area of the market and address the question - what will my mix sound like when compressed?

Traditionally it hasn't been possible to audition (or encode) to lossy formats in real-time within a DAW. Pro-Codec, addresses this by providing the ability to select ﬁve different codec variants simultaneously and audition them at the ﬂick of a switch. Amazing, eh?

This is complemented with metering and audio analysis functions as well a full range of encoding and decoding tools.

The Pro-Codec plug-in comes in the familiar light-blue Sonnox livery, with pride of place being given to the zoomable FFT display that provides detailed visual feedback on the currently selected codec.

This includes left, right, sum and difference display options, as well as NMR (Noise-to-Mask Ratio) that indicates the audibility of codec-induced noise. In the lower half of the plug-in, there are sections for AB auditioning, and even ABX blind testing.

A bitrate compression display tells you how much data you're stripping out, and the Trim section allows you reduce the level of signal going into each Codec. Although an apparently rather innocent feature, this is perhaps one of the most interesting areas of the plug-in.

Filtering can increase level, and coding compressed audio is no exception. With a particularly hot input it's possible for overloads to occur once decoded. In fact, we had to trim some material by over 4dB to ensure this didn't happen - something that you would never get to know under normal circumstances.

This, along with the ability to hear the Difference signal (i.e. what the codec is stripping out), is worth the price alone, though the audition and comparison routing functions are all exceptionally good.

Once you're happy with the settings, encoding of multiple formats simultaneously is simply a matter of enabling record in the plug-in and pressing play in your DAW. It's a great time-saver if you need to run off multiple versions of a ﬁle with the minimum of effort or fuss.

There really aren't any plugs like it. Clearly, to some it will fall near the end of their wish-list, but to anyone truly interested in maintaining control over the quality of their audio as presented to the consumer, it's an incredibly useful, even essential tool.

At nearly £300 it's not cheap, but it provides the utmost professional quality in functional terms. Once you've used Pro-Codec you won't hear compressed audio the same way ever again.